From A to Zee: Could Disney/Mickey Come to the Rescue? 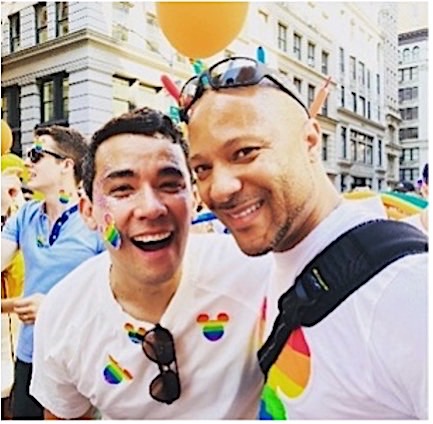 I grew up about a mile away from Disneyland in the 1980s and remember when it used to cost only $10 for California residents to attend the park!  (Aww, the good old days.) You are even in my family photo albums! There is one photo of my grandmas and I at Disneyland, taken on one of the only very few occasions in my lifetime that the three of us were all together. >> Bertha was my last remaining grandparent, and, rest her soul, she passed by the time I finished this letter to you<<

I loved the It’s a Small World ride! What I loved most about this ride was the message of acceptance, inclusion, and community. Each character had their own ethnic, racial, cultural background that they represented, but they were also loved and uplifted for it. Since I knew that I was different from others around me, it gave me hope that I’d also be accepted, loved, and uplifted for who I was.

I think it was in 1991 that I received a letter from you inviting me to interview Malcolm Jamal Warner (MJW) for the Mickey Mouse Club! We got to play football, ride horseback, and even grill hamburgers. It was one of the highlights of my teenaged life!

My uncle has worked for Walt Disney Animation Studios since 1996. More recently, he has taken on caring for my nephew (now ‘cousin’) who has tested positive for muscular dystrophy. Thankfully, Disney medical coverage will ensure he has everything he needs to live the longest, most independent life possible, (much like his cousin Matthew.)

In 2019, my partner Ore, his best friend Eddie and I decided we’d attend World Pride in New York City. Well, Eddie happens to work for Disney so we were all invited to march along with Disney in the world pride parade. What a joy it was to meet so many amazing people from spanning the entire Disney footprint! Some identified as members of the LGBTQ+ community while others were allies.

Once I completed writing Our Gay History in Fifty States I had to reach out to Disney legal to get approval to use the Disney image and name within the book. Max, within your corporate legal department, made the process so easy. Speaking of history, a batch of “No Promo Homo” laws came out as a response to the HIV/AIDS crisis that started in the early 1980s. Somehow elected officials at the time believed that if educators didn’t talk about LGBTQ+ issues at school then somehow (miraculously) kids wouldn’t realize they were LGBTQ+. They didn’t work. We still came out and created our own families/communities.

Enter Florida in February 2022, vying to reconstitute these old tropes of LGBTQ+ indoctrination in Disney’s backyard. The Florida House passed the “Parental Rights in Education law” or so called “Don’t Say Gay” bill. Disney was silent. Then in March 2022 the Florida Senate passes the “Don’t Say Gay” bill. Still, Disney the largest employer in the state (and very likely the largest employer of LGBTQ+ folk in the state as-well) remains silent. After mounting pressure Disney CEO Bob Chapek wrote in a memo to staff “You needed me to be a stronger ally in the fight for equal rights and I let you down. I am sorry.”

I/we don’t expect allies to be perfect, but I/we do expect allies to not remain quiet when our youth, families, and communities are under attack. The tide has changed, and we appreciate Disney’s most recent stance for “this law to be repealed by the legislature or struck down in the courts” as well as being “dedicated to standing up for the rights and safety of LGBTQ+ members of the Disney family, as well as the LGBTQ+ community in Florida and across the country.” Being the ally that you have shown yourself to be, here are some action items to consider adding to your ever-growing list:

Lead the charge to repeal Florida’s Don’t Say Gay bill. In March 2016, North Carolina’s “bathroom bill” HB2 was signed into law prohibiting transgender and gender nonbinary people from using restrooms that correspond with their gender identity. Over 400 companies join the boycott of doing business in the state.

Be THE COMPANY spearheading and coordinating the charge along with both national and local LGBTQ+ organizations.

Did you know that Kelley Baker, then Vice-President of Diversity at General Mills, was the first company representative to testify in front of the U.S. House congressional committee in support of the passage of the Equality Act? Disney is a brand that touches every household member, whether through music, shows, movies, cruises, or theme parks.

Be vocal and present when discussions regarding equality are happening locally or nationally.

Significant cases like Obergefell v. Hodges and Bostock v Clayton County change the lives of the LGBTQ+ community from coast to coast. Disney has been one of those companies involved in this fight but waiting for a case to get to the state or federal supreme court can sometimes be too late.

Employ your advocacy from the very start of the conflict so there can be as minimal impact on the LGBTQ+ youth in question as possible. (You can change the trajectory of Florida’s Equality Profile you have to just want it bad enough.)

Mickey Mouse’s Florida home is in Orlando. That is the city where your empire resides. Orlando is also home to one of the largest LGBTQ+ populations in the U.S. The Center Orlando is one of the few places within the city where any member of the LGBTQ+ community can walk in and feel safe, and seen for who they are.

Is there a reason why this center isn’t named after, and sponsored by, Mickey Mouse (much like the Ronald McDonald house)?

GayDayS® (#RedShirtDay) attracts over 180,000+ celebrants from across the nation and around the globe!

It’s my understanding that GayDayS® is not formally a Disney sanctioned event. Let’s change that!

Double Up on Supplier Diversity Efforts

A nationwide boycott of the State of Florida due to the “Don’t Say Gay Bill” could have a devastating impact on the state’s economy, especially small businesses.

Double up on your supplier diversity spend with minority, women, veteran, disability, and LGBTQ+ owned businesses over the course of this equality battle.

The resurgence of book banning is so disheartening especially when kids across the country are demanding that a more diverse history be taught in their schools. There are 4,269 public schools within the state of Florida.

Make sure there is at least one LGBTQ+ history book in each Florida school.

In closing, Disney is in the business of deeply connecting with children and making them believe in magic. How can they believe in magic when their mere existence is being challenged? Below are some Disney quotes used to inspire kids. We hope these same words will inspire you.

“Ohana means family, family means nobody gets left behind. Or forgotten.” – Stitch

“Your identity is your most valuable possession. Protect it.” – Elastigirl

“Always let your conscience be your guide.” — The Blue Fairy

“Sometimes the right path is not the easiest one.” — Grandmother Willow (Pocahontas)