“Holding Out For a Hero” 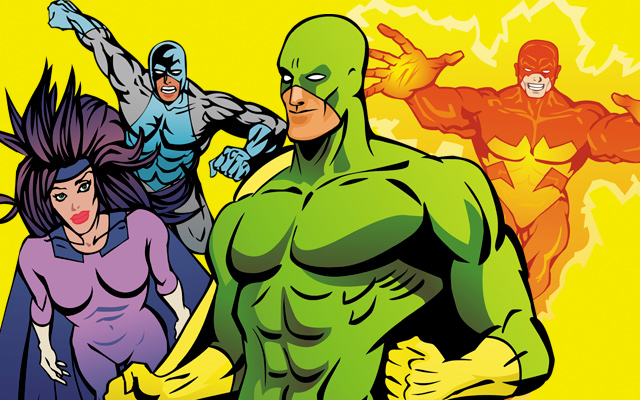 Democracy is a funny thing. Last July’s embarrassing, three-week-long state government shutdown and its embarrassing, anticlimactic resolution epitomize the deep dysfunction intrinsic to the Gopher State’s current government. The whole sad spectacle was enough to make your average voter feel like a damsel in melodramatic distress, pining to be rescued by a quixotic figure who can change from the inside a political system that doesn’t want to change…but surely needs to. So we at Lavender’s Nerd Desk have collated the most prominent traits of Minnesota’s preeminent politicos and matched them up with comicdom’s first family, unleashing onto Minnesota’s regime a warning of change–the All-New, All-Different FANTASTIC FORE!

The Thing
Governor Jesse Ventura
Our Fantastic Fanatic is going to meet all kinds of distraction in this age of instant Internet polls and constant focus grouping, where everything, from lapel pin choice to hairstyle is hyper-analyzed.  Much of this feedback will originate from political opponents; some of it will be from supposed allies–lobbyists, hobbyists, careerists, and porkbarrelists–who seek to bend our Fantastic Fanatic to their unwholesome will.  Unfortunately for Minnesota’s 38th Governor, when he met with such forces, his administrative difficulties were catalyzed by his notoriously thin skin.  Our Fantastic Fanatic must therefore armor herself with the metamorphic epidermis of the Thing,  immunizing her against Ventura’s waterloo.

Mr. Fantastic
Representative Keith Ellison
One certainty about changing the political system is that it will resolutely change the changer, so our Fantastic Fanatic will need to be flexible, the raison d’etre of Mister Fantastic.  This Protean symbiosis is perfectly embodied by the Fifth District’s Representative Keith Ellison.  In the popular consciousness, he reshaped his corner of the House by becoming the first practicing Muslim to assume such an office and the first African American sent there from Minnesota.  This vista lends Ellison a special perspec- tive where reaching out–reaching wayyy out–is capital.  Using the parallel stretch powers of Mister Ellison and Mister Fantastic, the  Fantastic Fanatic will be able to go to any lengths to affect change.

The Human Torch
Senator Al Franken
Our Fantastic Fanatic will have to generate an awful lot of energy to make her political will manifest.  For that, we call upon the fiery temperament of Minnesota’s junior Senator.  That same irascibility was wielded against him during the campaign as questions of his “fitness for office” were raised and re-raised, but, as an energetic Senator, Franken has parlayed that same vigor into the championing of several major initiatives, not the least of which was health insurance mandates meant to curtail supervillainous business practices. Thusly we grant our Fantastic Fanatic the fire power of the Human Torch.

The Invisible Woman
Representative Michele Bachmann
If our Fantastic Fanatic shapes half the policy we’re hoping for, she’ll earn the ire of both major political parties, the universe’s largest corporations, and dozens of special interest groups, so getting elected and staying elected is paramount.  That’s where invisibility comes in.  Turning invisible is the last trait a professional politician would normally want– at least, when no scandals are brewing–but the Fantastic Fore’s resident mother figure is also able to project invisible force fields for offensive and defensive effects. This is the unapparent wheelhouse of Michele Bachmann, who wields the non-threats of same-gender marriage, science in schools, abortion-happy medical professionals to manipulate low-information voters into re-re-re-installing her as the Sixth District’s House Rep so as to further her baffling agenda. Imagine if those powers were used to further the forces of good!

The Fantastic Four, The Human Torch, Invisible Woman, Mister Fantastic, and the Thing are TM and (c) Marvel Entertainment 2011.