PTP’s Astonishing “When We Were Young and Unafraid” – A Women’s History Month Must-See!

When We Were Young and Unafraid - Persistent Theatre Productions 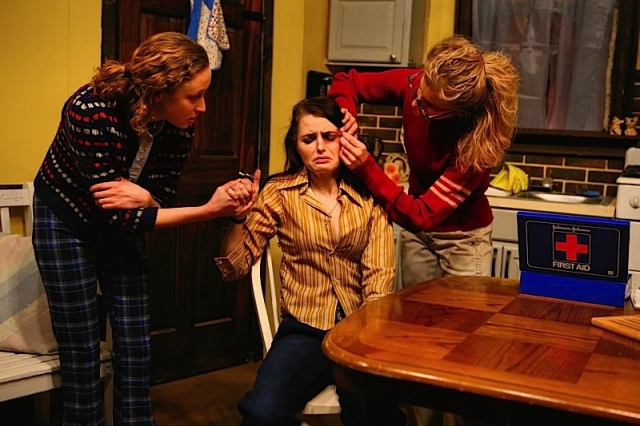 Sarah Treem writes roles with a diverse understanding of a wide range of women. Diverse, not in the intersectionalist, identitarian way of current common usage, but organically diverse within a personality and individual viewpoint. This insight serves her brilliantly in When We Were Young and Unafraid, now in an production that simply astonishes at Fallout Urban Art Center by Persistent Theatre Productions.

In a wonderfully muscular performance, Julie Ann Greif brings grit, steel, and kindness to Agnes, a woman in her early middle years who runs a secret safe house for battered women near Canada on a Washington state island. When Mary Anne (an electrifying Aidan Jhane Gallivan), a severely traumatized young woman fleeing a violent husband goes there for protection, she interfaces with Penny (a lovably vulnerable Audrey Parry), Agnes’s high school senior daughter. Out of their age difference, traits, and belief systems, springs forth one of contemporary drama’s most ingenious entanglements of two disparate personalities whose influence upon one another leads to some utterly astounding outcomes. These two actresses are thrilling to witness as they unfold these outcomes.

As one can imagine, a safe house is a setting brimming with dramatic potential and Treem has explored that intricately. Moreover, director Meggie Greivell has mined that with unflinching honesty and masterful grasp of the play’s complexities. Her artists conjure a spirit of the time that you feel as you watch. 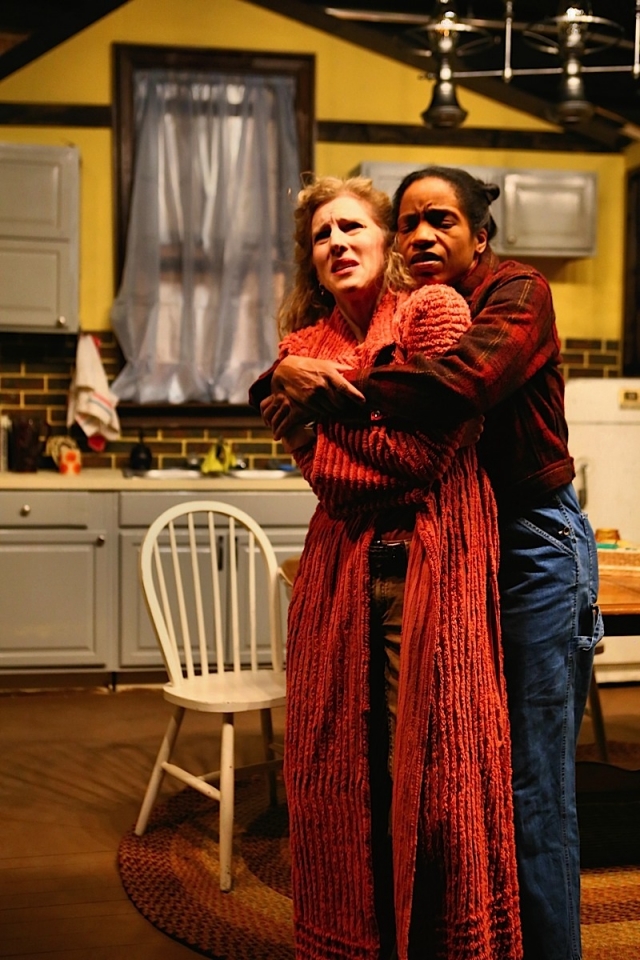 The textures of the era and the warring ideologies, not just Left v. Right, but within the Left, are rendered vividly. Lesbian separatism and a spirit of revolution, though not operative in Agnes’s sensibility, are inevitable given her situation. Her feminism comes from a grounding in Good Samaritan values, not out of indoctrination.

Treem’s counterpoint to this is lived into by a plucky and mercurial turn by a dynamic Lynda Dahl as Hannah, a lesbian with a cause, driven by zeal and earthy passion. She might be thought of as a philosophical mix of the Radical Faeries and the Lesbian Avengers. As we get to know Hannah, we see her rethink some of her views, which only adds dimension to this remarkably rich play. Treem miraculously avoids polemics and preachiness. She honestly and forthrightly wrestles with painful feelings and messy history rather than making definite declarative conclusions that playwrights such as Tony Kushner and Suzan Lori-Parks compel us to. In other words, she defies the standard of today. Treem respects the audience’s intelligence.

Dahl’s performance is not only captivating but an instructive one that offers today’s audience a window into sorting out how much of Hannah’s separatist ideology has now become mainstream. Again, respect for audience intelligence. Though radical politics infuse the air, you the watcher are left to mull it over in your own way and conclude what you will or not. This may well be a sign of greatness in playwriting. This is why that even though When We Were Young and Unafraid is clearly a feminist play, it doesn’t preach to the converted. It humanizes real conflict rather than turn it into a cartoon. It seizes truths about the human condition. It will appeal to conservative women and all kinds of men in a way that could win their hearts and minds. Something in this is again, miraculous, and dare I use that overused word, ‘inclusive’, but in the purest sense.

Jared Mogen as songwriter Paul, When We Were Young’s only male character, elicits a winningly wholesome quality from which important details of the era and conflicted views of manhood radiate. The imperfect Paul is coming out of a marriage in which the dreams fostered by his sheltered upbringing were trampled on by an addict wife who had given her life and soul over to the porous world of drugs, hedonism, and easy sensuality. This has left the emotionally abandoned Paul invalidated, without bearings. Hence, the turmoil in the house triggers him, setting up intensely charged interplay with Mary Anne. Mogen is luminous in a performance that casts shades of vibrant light and sinister dark. A gifted folk-style vocalist as well, Mogen also sings a touching solo reminiscent of a film and play of the late 1960s only a few years before Treem’s play is set. The same energies were still lingering in the air a few years later.

That play and film’s title was Leonard Gershe’s Butterflies Are Free, a flower child era anti-establishment classic; and its title song is sung sweetly by Edward Albert. I refer to it because both Gershe and Treem are akin in sensibility, though different in intent. The connecting thread is that each captures that era’s zeitgeist viscerally. Such an atmosphere emanates throughout Greivell’s production in which every single artist magically transports us to the early ’70s, a time in which I suspect most, if not all of the artists, were born afterward.

Simple yet profound touches add immeasurably to this: Shanna Frasier’s period sound design, Terry Krider Kleinbaum’s sublty well-observed costumes, and a set designed by Jay Beal and scenic painting by Martin Ware that could beguile with nostalgia, those of us who actually lived during that time.

Note: When you attend, go early to take in some thought-provoking visual art by women in the Urban Art Center’s gallery area which connects to the theater space.