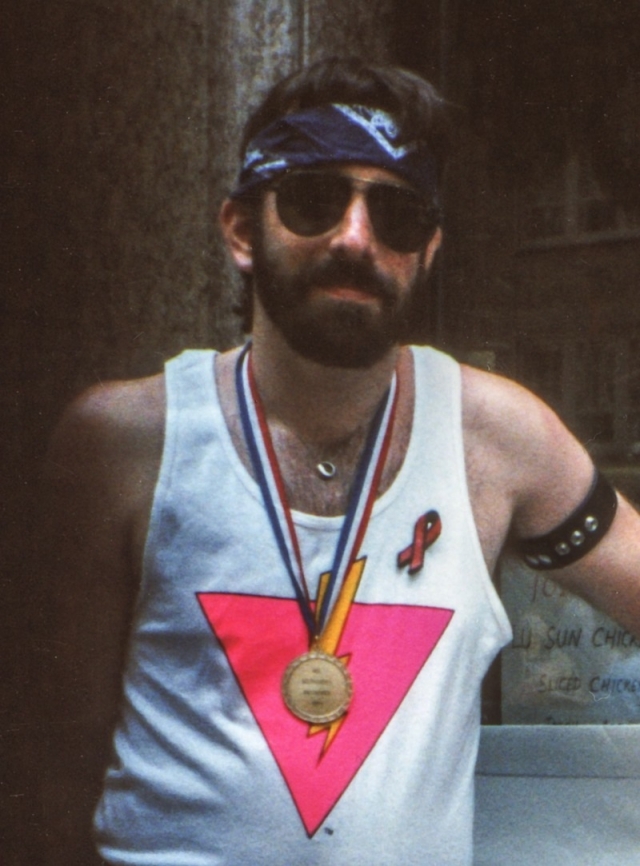 June, 1994: Your humble columnist at the Stonewall 25 March.

This June marks the 50th anniversary of the Stonewall rebellion. The Stonewall Inn was a Greenwich Village neighborhood gay bar on Christopher Street in New York City. In the early morning hours of June 28, 1969, the police raided the bar as they had many times before. But this time the bar’s patrons, who were mostly black and Latinx drag kings and queens, resisted and fought back, and the raid turned into two days and nights of riots. Many people consider these riots the birth of the modern continuing struggle by the GLBT community for our human rights.

Big plans have been made to celebrate this year’s fiftieth anniversary of Stonewall. The epicenter of the celebrations will be New York City’s WorldPride NYC/Stonewall 50, but there also will be huge commemorations elsewhere. 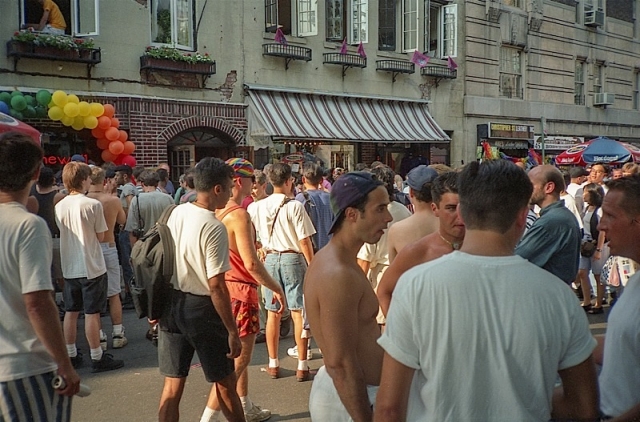 June, 1994: Celebrating Stonewall 25 on the plaza in front of the Stonewall
Inn. Photo by Ken Binder.

Twenty-five years ago, in 1994 and also in New York City, the last big Stonewall milestone anniversary was Stonewall 25—and I was there as part of my Great Lakes Mr. Drummer 1994 title year.

In 1994, being gay, and being in leather, was in many ways different than today. AIDS and the HIV virus were still decimating the community. There were no cellphones, no social media, and no websites. If you wanted to hook up, you used your landline telephone and a modem to dial up AOL, CompuServe or a local BBS. Or you actually showed up at a gay bar, coffee house, or cruising ground.

That was the setting in which I traveled to New York for the Stonewall 25 celebration. I arrived on Wednesday, June 22, in time to see a performance of Angels in America Part Two: Perestroika, the then-new AIDS-themed play by Tony Kushner.

Other huge events were held concurrently with Stonewall 25. Gay Games IV featured athletic competition and a week-long cultural festival. The International Lesbian and Gay Conference was the largest gathering ever of international lesbian and gay activists. 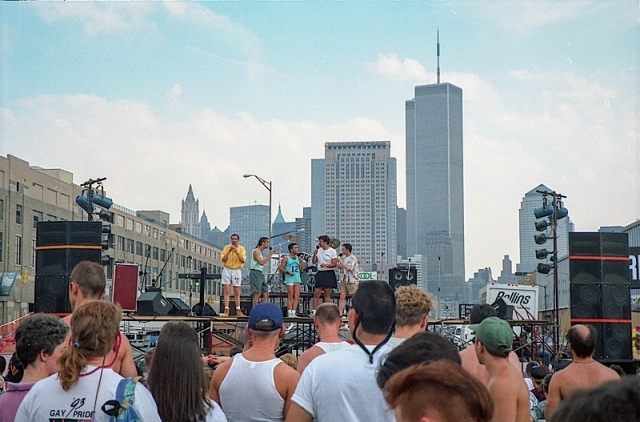 The stage at PrideFest ’94, with the Twin Towers in the background. Photo by Ken Binder.

But the centerpiece of Stonewall 25, on Sunday, June 26, was more than just a “pride parade”— it was the “International March on the United Nations to Affirm the Human Rights of Lesbian and Gay People.” The march was international and it was the largest march for human rights that had ever been held until that time. Fittingly, it was led by veterans of the Stonewall rebellion, the pioneers who started it all.

The march was mind-bogglingly huge. The first wave of marchers started lining up at 10 a.m., stretching over a lineup area covering thirty city blocks. Stepping off at 11 a.m., the March started at 42nd Street and 1st Avenue and passed by the United Nations building. It then continued to the Great Lawn of Central Park for a post-March Rally with activists, human-rights leaders, and performers and entertainers from around the globe. Befitting the huge scale of the march was “Raise the Rainbow,” a mile-long rainbow flag.

June, 1994: Your humble columnist at the Stonewall 25 March. Photo by Ruth Humleker.

I marched for a time carrying the banner for the Minnesota contingent. Then I marched with the leather contingent, which experienced some controversy. At the last moment a woman in black, cracking a twelve-foot bullwhip, was added to the front of the contingent. A group of leather folk held hands to create a 28-foot bubble around her so that no innocent bystanders would be inadvertently hit with the whip. Some wondered if this was the image the leather/BDSM/fetish community should be putting forward during the march, but the crack of the whip was definitely an attention-getter.

At 3 p.m., all along the March route, there was a Moment of Silence to “remember all those who have died of hatred, whether by violence or by inaction in the face of the worldwide AIDS epidemic.” Then, after remembering the dead, a Moment of Rage spread along the March route with over 1 million voices yelling, screaming and howling our determination to continue to “fight like hell for the living.”

Both the march and the leather pride celebration made a lasting impact on me, who had been out as a gay man for many years by that point but who was still relatively new to leather.

Now, 25 years later, some things haven’t changed since Stonewall 25 or, for that matter, since the original Stonewall rebellion. Our human rights are still worth fighting for. And Pride is still worth celebrating.