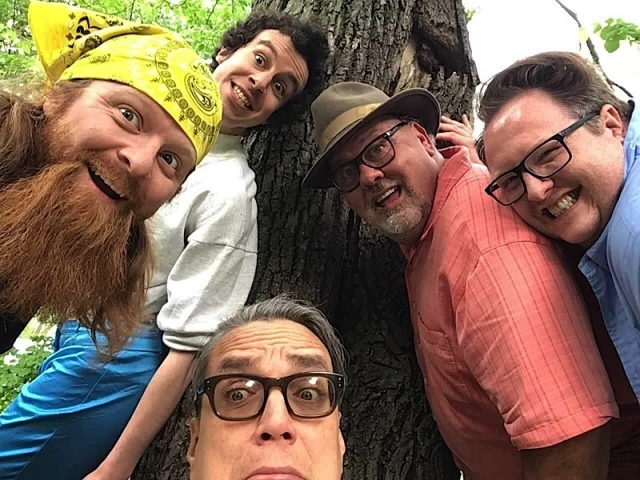 On this 50th anniversary year of the Stonewall Riots, how fitting that the longest-serving local queer theater company speaks to that moment. Marvel Ann Theatre has been producing for two decades at varying intervals and they’re also one of the veteran groups associated with the Minnesota Fringe Festival since it’s earliest years.

Marvel Ann founder Dennis LeFebvre has conceived of five people hanging out at a piano bar at closing time in Mighty Real. Three gay men, one straight man, and someone who could be called pansexually or bisexually genderqueer. The actors’ dialogue-monologue approach comes entirely from each one’s actual life and all five deliver with wit, candor, and authentic emotion.

Daniel D. Barth as the oldest brings strength and warmth which culminates in a wrenching remembrance of the AIDS Quilt. Raine Hokan reminds us how the bar scene, with its tawdry stigma in the eyes of society, including gaydom itself, is actually a place where some of the most deeply bonded relationships have been known to begin. Johnny Packard maneuvers a fan with the expertise of a geisha and relates with jolting power the humiliation of being the brunt of public antigay verbal aggression.

However, Mighty Real shrewdly and organically brings a clarifying straight perspective through a poignant performance by John Larson as the bartender whose gay father was blind to the impact which that had upon his son. What makes Larson’s viewpoint so ironically refreshing is that it goes against the grain of the narrative that the actions of gay persons in finally being themselves while married with kids doesn’t necessarily have real consequences. It challenges the conventional wisdom of “if I’m not happy, how can my kids be happy”. Larson’s contribution counters that honestly, though without malice or bitterness. It’s something those of us who identify as gay need to be sensitive to, and frankly, sometimes some of us are not.

A vibrant Tyler Borresch dazzles with challenges to the others about their supposedly fixed views of sexual orientation and makes us wonder to what degree being bullied in childhood has shaped they’s life overview. They hectors about the use of the word “normal”. Borresch delights and scandalizes as a spirit with no filter on their passions and matter-of-fact approach to transgressive behavior. In a way, they capture the spirit of the original Stonewall riots.

Mighty Real’s skillful actors sidestep being maudlin and self-piteous, so often the bane of dramedy about marginalized people. Nor does the piece fall into the trap of beating up verbally on the straight guy. Nor are conflicts between the generations swept under the rug. In fact, it makes us want LeFebvre to collaborate again with Barth and Borresch to dig deeper into that generational divide where some older gay men hold to different guideposts not embraced by younger queers and vice versa.