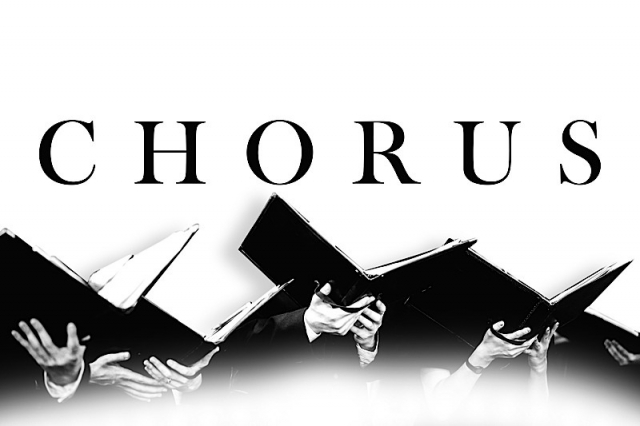 The close quarters of a college choir on tour are powerfully rendered in Chorus by director-playwright Michael Rogers. His imaginatively simple staging, which uses blocks big enough to sit on and arrange, allows for scene transitions from different settings such as car seats, buses, and bedrooms which the singers share in the homes of host families in the various communities where their performance itinerary takes them. Music binders are used to signify bedcovers.

The impeccable ensemble plays a range of thought and emotions and their vocals are not only beautiful, but at moments, sublime. Humor is mined out of being crammed in a small bedroom and even the unlikely subject of cannibalism, of all things. Chorus also has serious concerns such as regrets over not having been the parent you ought to have been and the bittersweet feeling that this time of the characters’ young adulthood is fleeting. There’s a stark moment when the group goes from indulging in what is a blasphemous joke, to being brought down to earth with news of a tragedy. Rogers stuns with a work that paints in cohering strokes and shades of light and dark.

Chorus contains a character written in one of the most unlikely ways for our time. The role of the choir conductor is played in an exquisitely wrenching performance by a nuanced and steely Sean Dillon. Rogers has written him with a delicate sense of a Victorian or post-Victorian schoolmaster, the likes of which are portrayed in such classic works as the novel and films of James Hilton’s Goodbye, Mr. Chips and the play and films of Terence Rattigan’s The Browning Version. The scene where his middle-aged regrets become obvious to his daughter and son-in-law beguile with sadness. Mackenzie Lahren and Derek Landseidel are superb in those roles. The effect is heartbreaking.

Lighter, yet very touching, moments indeed transpire between two men skittishly revealing their affections for one another, by the darling duo of Alex Van Loh and Alex Engelsgjerd. It’s fun to watch how they read one another’s signals and get interrupted at inopportune times, especially by Justin Betancourt, an actor who truly has a flair for comedy and a winning stage personality.

The vocals, classical and what could be called classically-based contemporary, are like a healing balm, which this ensemble performs with soulful transcendence. The effect is enhanced by John Guari’s lovely original underscoring. All performers also deliver vivid characterizations as actors while moving the action along with varying rhythms and pace, so we sense that Rogers’s script has a musicality in its own right. The rest of the cast, like the aforementioned actors, are also stellar: Abby Baggennnstoss, Nora Coyle, Thalia Kostman, Tara Lucchino, and Rogers himself.