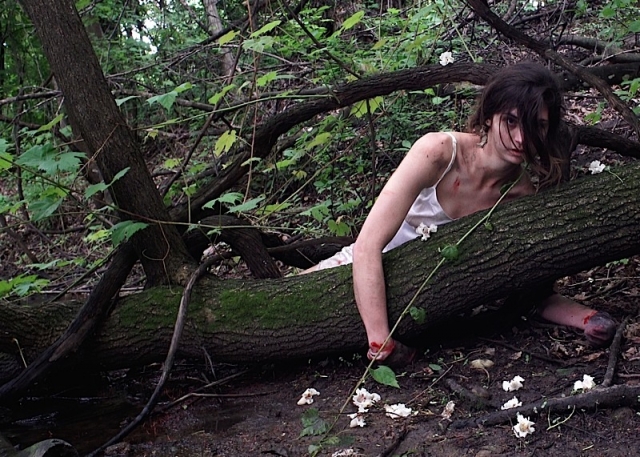 Titus Andronicus by William Shakespeare is one of the goriest plays ever written. It is so horrific with its dismemberment and other depictions of brutality that it borders on being unwatchable—an example of where the violence is so overpowering that it shields the actual story from even being told. However, with TITUS: Sweet Water, Silent Walks, the problem is solved. Co-director Adrian Lopez-Balbontin and choreographer/co-director Jackie O’Neil have ingeniously respected the original while transporting the substance of the text to the level of elegiac ritual and movement fluidity that reverberates of modern dance legend Martha Graham. Lopez-Balbontin wrote the adaptation and honors the original remarkably well.

Moreover, O’Neil delivers a breathtaking performance as Lavinia, the daughter of Roman General Titus Andronicus and the victim of unspeakable mutilation. At points she almost seems to fly through the air at brutalizing behest of ruffians whose sadistic depravity knows no limits. Acrobatic elements and stylized violence mesmerize with their grace: simultaneously beautiful and horrifying. Lavinia is clearly the protagonist in this adaptation.

The ensemble adheres meticulously to dreamlike but deliberately staged group formations. Black draping, a white-clad Lavinia, and red fabric signifying blood may actually imprint within the audience psyche the very presence of evil the original Shakespeare awakens us to. Ultimately, such an approach may be as much or more effective than actual graphic blood, butchery, rape and disfigurement.

All ensemble voices are uniformly solid and expressive. The powerful Greek Chorus conceptualization is empowered by imaginative sound and musical effects. Shae Palic is fittingly and firmly masculine in a crossgender turn as Titus. Two actors give notably vivid vocal deliveries: Alex Moronge and Todd O’Dowd in one of his sharpest performances to date. If there is one production at Fringe that’s not to be missed, it’s this one!

Presented by the BAND Group which partners with Cornerstone, an organization addressing problems of violence.