From the Editor: Can’t Close Art 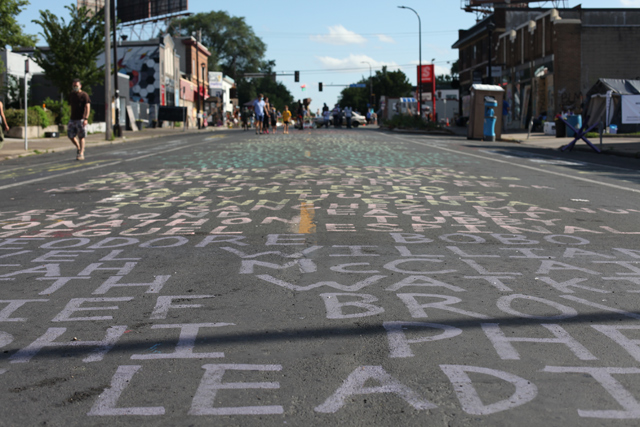 Just as crisis drives innovation—tragedy drives creativity. As our city emerges from the rubble of recent rioting, unrest looms but has manifested itself into mostly peaceful, colorful bursts of expression dotting our city on the mend.

With each boarded-up window came a blank canvas; certain areas have remained closed to traffic in favor of the installations that have cropped-up since the killing of George Floyd. Minneapolis’ eclectic response to a tragic event has created its own genre of street art.

The lines between art and vandalism used to be blurry. At least subjective. The vibrant works appearing on building walls and city streets in past few months have added aesthetic value to their unassuming canvas-hosts, in some cases. With countless hours of cleanup ahead for the city and property owners, countless awe-inspiring and priceless depictions of a time—are likely here to stay.

On paper, Minneapolis’ art scene is closed. Very few galleries are open, the theater, concert, and festival calendar is all but depleted. People seem uncertain of dynamic protocols when it comes to gathering—but I say we’re open.

Open as ever, in fact. The art has moved from galleries and stages to the street. We’re in a moment that has been documented in imagery, and the sounds, smells, and flavors of the places impacted. During my own tour of Minneapolis’ new street art-movement, I heard everything from blaring reggae music to Mexican radio from a tinny boom box. I could smell the sizzle coming off the barbecue at Smoke in the Pit, directly adjacent to where George Floyd was murdered.

It was the visual aspect that was most impressive. I was truly fascinated by the impactful imagery displayed through energetic murals and towering installations. The mock-cemetery located near 37th street and Chicago Avenue was especially sufficient in getting its point across.

I was offered water more than once. There are pop-up stands where you can purchase t-shirts, sunglasses, stickers, and whatever else I failed to notice. Hot food from a number of vendors is available, plus you’re not far from plenty of other food options, too. If you’re ok with a little adventure, this year’s art scene is something to see.

So, it wasn’t the typical gallery opening or performance that you’d normally see reported. But it was a rich, eye-opening experience, for which I would recommend a deliberate trip. I saw some unforgettable art and saw crowds of inquisitive minds. I had a fantastic lunch. I felt safe.