Someone once told a colleague of mine that he stopped listening to my Big Gay News podcast because the stories were always so depressing. I wondered if perhaps he had unrealistic expectations of the word “gay.” Still, I understand his reaction. Clearly, regardless of all the progress over the last generation, the world is still a pretty grim, unwelcome place for GLBT people.

I’m reminded of this fact every morning, as I scour the Internet looking for the day’s top stories. Headlines like “Attackers Sought in Beating of Gay Man,” “Man Charged in Murder of Transgender Woman,” and “Gay Activist Found Beheaded” are the norm. If it’s not a physical assault, it’s often a political or religious one. To say I’ve become somewhat numb over the past few years is an uncomfortably true understatement. I’d like to believe it’s partially an act of self-preservation. 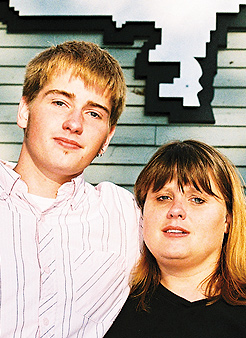 Thankfully, I haven’t become a wholly unfeeling news-gathering automaton yet. Often, a story sneaks through my wall of detachment—usually one that’s local, or hits home in some other way. Such is frequently the case with stories of antigay bullying, probably because I, like many, was once the victim of it, and struggled for much of my adolescence with being gay.

It’s no surprise, then, that I paid particular attention to the story of Justin Aaberg, the 15-year-old gay Anoka High School student who took his own life after an internal struggle with his sexual orientation, made worse by the bullying of his peers. Unlike many, he had been able to come out to his mother and friends. He even had a boyfriend for a time. Still, the bullying and the pain were so great that he felt his only solution was to take his own life.

Beyond my heartfelt sadness over this untimely death and the frustration that antigay bullying persists, one thing kept me thinking about this particular tragedy. Shortly after her son’s death, his mother, Tammy Aaberg, testified before the Anoka-Hennepin School Board. During her testimony, she called on the school district to address antigay bullying better. In the process, she highlighted its policy toward sexual orientation.

I found this policy particularly troubling when I read it: “Teaching about sexual orientation is not a part of the District adopted curriculum; rather, such matters are best addressed within individual family homes, churches, or community organizations. Anoka-Hennepin staff, in the course of their professional duties, shall remain neutral on matters regarding sexual orientation including but not limited to student-led discussions. If and when staff address sexual orientation, it is important that staff do so in a respectful manner that is age-appropriate, factual, and pertinent to the relevant curriculum.”

The district argues that this “neutral” policy attempts to respect the diversity of opinion regarding sexual orientation. Critics like Aaberg counter that it unnecessarily prevents teachers from helping gay students. The district states that its antibullying policies specifically require teachers to address it, even if it’s directed at a student because of perceived sexual orientation.

Quite frankly, the district’s approach appears vague, contradictory, and ultimately harmful. What message does it send to a young student struggling with being gay? “Our attitude toward your very existence is neutral.” Teachers can’t talk about the issue until it escalates to the point of bullying, and even then, no clear guidance is give on how to discuss the topic. That seems like the least-effective possible approach.

Thankfully, the grief caused by Justin Aaberg’s death is being turned into action. A group of parents, students, and teachers actively is lobbying the district to change its policies.

If only school districts like Anoka-Hennepin acknowledged the presence of GLBT students, and provided support for them, then perhaps some day I’d be able to include more stories in each day’s Big Gay News about the achievements of our community, rather than its tragedies.

And for that guy who stopped listening, I gladly would change the name to Big Happy News.