Playing for the Other Team: It Isn’t Over at UMD 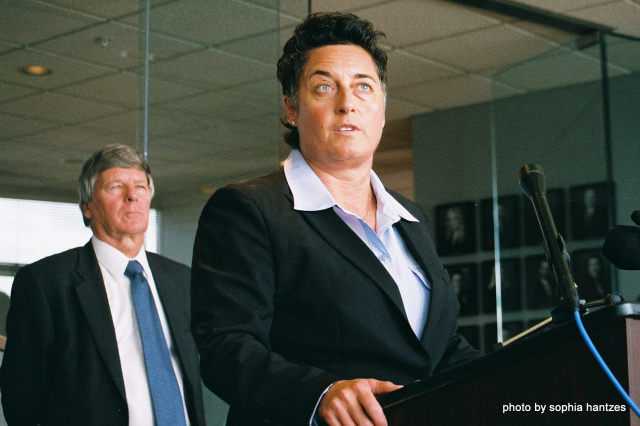 We first caught wind of trouble in Duluth — a city better known for its pine trees, waterfalls, and hiking trails than controversies — back in January, once word that legendary Bulldog Women’s Hockey Coach Shannon Miller was let go from the University of Minnesota-Duluth when her contract was not renewed.

Miller built up the UMD Division I hockey program from scratch in 1998 to the force it is today, winning five national championships along the way. UMD initially declared her release to be financially driven, though the fact that she was never asked to renegotiate and was paid drastically less than the UMD men’s hockey coach prompted us to wonder why no one was asking whether Miller’s sexuality came into play. (Miller is openly lesbian.)

Well, someone asked. Three “someones,” in fact. On Monday, attorneys from Siegel & Yee and Fafinski, Mark & Johnson filed a federal lawsuit on behalf of Shannon Miller, former UMD head of women’s hockey operations, head softball coach Jen Banford, and former head basketball coach Annette Wiles against the Board of Regents of the University of Minnesota for violations of Title IX, Title VII, the Equal Pay Act, the Minnesota Human Rights Act, Minnesota’s Equal Pay for Equal Work law, and Minnesota’s Whistleblower Act. Miller, Banford, and Wiles claim “discrimination on the basis of their sexual orientation, gender, age, and national origin, as well as retaliation for their advocacy for gender equity in the athletics department at UMD.”

The tone of the press conference on Monday was bristling, indicative of the years of torment finally being brought to light. “Sexism and homophobia are alive and well at the University of Minnesota,” Miller stated during her turn at the microphone. She described one particular moment during which she arrived to work to find the name tag on her door had been removed.

“I showed up to work one morning, and my name tag was taken out, and there was a sticker on my door with the word ‘dyke’ written on it. And when I got to work, I certainly wasn’t the first person up in the hallway. There were many many people up in their offices so I feel like a lot of people saw that before they walked into their office. And of course I reported that. And I never did get a new name tag and there was no investigation and nothing happened.”

Representing the law firms were Don Mark of Fafinski, Mark & Johnson, and Dan Siegel, a Title IX guru who has previously won judgements for two fired women coaches against Fresno State University in 2007. Banford and Wiles were also present but did not speak.

All three coaches are openly gay. Jen Banford, NCIS Coach of the Year in 2013, was also told in December 2014 that her contract would not be renewed. Wiles resigned in June, alleging a hostile work environment within the UMD athletic department.

(The official complaint can be read here.)
Allegations against all three women are outlined in detail dating back years, and gaining traction upon the hiring of Athletic Director Josh Berlo in April of 2013. The suit alleges that Shannon Miller brought multiple instances of harassment to the attention of the University, such as hate mail “calling Miller a ‘dyke’ and suggesting that she ‘go’ home, emails saying ‘goodbye’ and ‘the end’ and mail containing clippings from newspapers showing the disparity between attendance at women’s hockey games versus men’s hockey games.”  It further contends that the University took no action.

The suit claims that Annette Wiles experienced “hostile and cold” treatment after appearing as the keynote speaker at UMD’s National Coming Out Day event in October of 2013. Wiles came out professionally as a lesbian at this luncheon, a moment that was supposed to hold great power and influence for University students and the public, and instead contributed to physical and mental suffering for Wiles herself and a result of stress. The complaint states that Wiles invited Berlo to attend the event with her, and after first falsely responding that he would be out of town, when she discovered him in his office the day of, he responded he was “not available for that event.” Furthermore, the complaint continues that a few days later in the University athletic department workroom, Berlo asked Wiles, “Did you give it a lot of thought before you decided to speak?” From this time on, the suit contends that Wiles was “shunned and excluded” by athletics department staff.

Finally, the lawsuit also provides detail into alleged discrimination against Jen Banford and the women’s softball program, including an incident in 2006 “in which Banford and Miller were excluded from a University golfing event, in the spring of 2007 Banford was again excluded from a fundraising event held in Proctor, Minnesota. As the women’s head softball coach, Banford submitted her name and timely paid for the event, but was told when she arrived that there was no place for her to sit.”

The suit demands a jury trial and requests damages for emotional distress as well as back and future pay.

On Monday, UMD Chancellor Lendley Black promptly responded to the lawsuit with a statement refuting all claims and denying any discrimination.

This story will be updated as information becomes available.