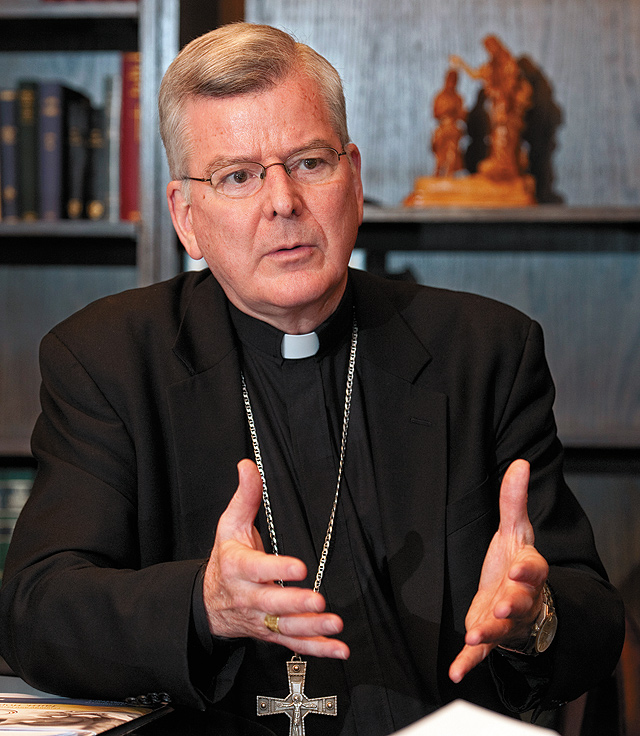 Last year the Archdiocese distributed 400,000 antigay DVDs* made by the Knights of Columbus meant to stir antigay marriage sentiments.

In the Oct. 6, 2012, Star Tribune Q&A with John Clayton Nienstedt, Archbishop for the Minneapolis-St. Paul Archdiocese, one question asked for clarification about a recollection by Rev. Michael Becker of St. Paul’s St. John Vianney Seminary that occurred at St. Paul’s Lexington Restaurant. The questioner said, “a man came into the restaurant and threw one of the church’s DVDs at you” to set context for a response.

Gregg Larson has come forth to challenge Rev. Becker’s account. He was at the restaurant with his partner of 35 years on Friday evening Dec. 3, 2010.  He was the man who confronted Archbishop Nienstedt. Larson: “First off, I didn’t come into the restaurant. My partner and I were there before they arrived. Also, I did not throw the DVD at him [contrary to Rev. Becker’s account to the Star Tribune]. I would never have done that. In fact, nobody in the restaurant even was aware of the conversation that we had with them. It’s less than accurate to characterize what happened that way. It also says that the Archbishop remained composed. He didn’t really remain composed. And in the Archbishop’s answer he didn’t refute any of that. He simply said, ‘I try to reply to emotional outbursts with reason, calm, and patience.’ Well, there was no emotional outburst. And nobody in the restaurant was aware of the conversation.”

Synchronistically, Larson had a copy of the DVD sent to his elderly mother at her nursing home in his car which he was intending to return to the Archdiocese. What follows is what Larson says actually happened starting when he saw Nienstedt waiting alone near the coat check to sit down. Larson: “First I went up to him and asked, ‘Are you John Nienstedt?’ And he said, ‘Yes.’ And I introduced myself. Then I said my mother got this piece of junk mail and I wanted to return it. And I said it was the [antigay marriage] DVD that you had sent out.” Larson then told Nienstedt that he had heard he is gay and that “if that was true then he was a hypocrite and I went back and sat down.”

Back at table Larson recalled that the DVD and letter were in his car.  He went to retrieve them, went back inside and went to the table with his partner where another priest and Nienstedt were now seated.  He told Nienstedt, “‘I had forgotten the DVD was in the car, so I can return it to you personally.’ And with that I broke it in half and I dropped the two pieces into the middle of the table and I took the letter and I tore it up and I put that in the middle of the table.”

Then Larson again mentioned what he’d heard about Nienstedt being gay: “He responded to me, ‘You shouldn’t believe rumors.’ And I said, ‘Methinks thou dost protest too much.’ And at that point he kind of raised his hand and snarled ‘Get out!’ And I responded that his behavior was unbecoming of an Archbishop and that maybe we needed an exorcist here. There was no yelling. It was a conversational level. The restaurant was full of people. No one knew what was going on. The other priest said that we were ruining their dinner and my partner said that they were ruining people’s lives. The priest said, ‘We will pray for you.’ My partner said, ‘Please don’t pray for me. I was raised as a Congregationalist and we were taught to think for ourselves.’ The priest replied again: ‘I will pray for you.’ And at that point we both left.”

Archbishop Nienstedt has been contacted for comment; as of press time, he has not responded.

*View the DVD messages via MnCatholic: Part 1 and Part 2