Genderbending in Twin Cities theater had a field day in 2007. An all-male cast of Richard III by 10,000 Things and an all-female cast of Anton in Show Business at Starting Gate were exceptional. With The Deception, Theatre de la Jeune Lune gave us its most satisfyingly gender-ambiguous and erotic-ambiguous production ever. Theatre Unbound’s Frankenstein Incarnate was given a sturdy turn by Laura Wiebers as philosopher William Godwin and Katie Guentzel’s flickering portrayal of decadent poet Lord Byron. Sonja Parks and Jamila Anderson crossed gender divides seamlessly in Pillsbury House’s Home. Monte Wheeler as Frank ’N’ Furter led a kinkily genderbent cast in Ordway’s sizzling Rocky Horror Show. Fashion 47 at Children’s Theatre glistened with male fashion models in drag. Illusion’s Act A Lady scoped the dangers of crossdressing in 1920s rural Minnesota.

Iconic lesbian playwright Carolyn Gage’s The Anastasia Trials in the Court of Women from Theatre Unbound and her classic solo play The Second Coming of Joan of Arc from 20% Theatre both were staged cracklingly. 20% was named among the Best of Lesbian Regional Theatre by Curve Magazine. 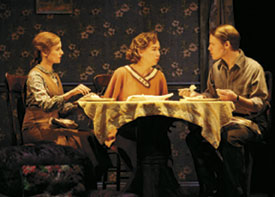 8. War With the Newts, Sandbox Theatre

The Anastasia Trials in the Court of Women, Theatre Unbound

Theater Artist of the Year

Theater Hero of the year

Guthrie’s Artistic Director wowed us by pulling the new Guthrie space into sharp artistic focus with numerous wonderful productions over the past year, many of them daring in subject matter. Moreover, local theater artists are employed there significantly, and local performance companies are provided opportunities to play there—all with a clear eye to cultural diversity. Dowling’s direction of The Glass Menagerie and The Home Place showed his scrupulous instinct for specific feelings beneath the written dramatic word. Topping it off, Ian McKellen and the Royal Shakespeare Company’s King Lear graced the Big G this year, plus Tony Kushner was commissioned to write The Intelligent Homosexual’s Guide to Capitalism and Socialism with a Key to the Scriptures. 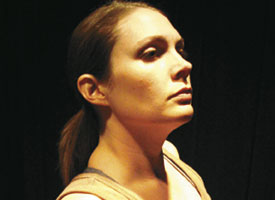 The Second Coming of Joan of Arc 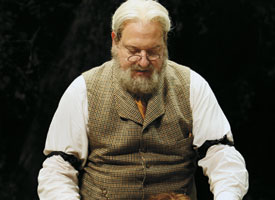 The Merchant of Venice and The Home Place

The Anastasia Trials in the Court of Women

Cri de Coeur with DOING or NOT

The Grapes of Wrath

Fresh from his Broadway triumph of Grey Gardens, composer Ricky Ian Gordon hit St. Paul with The Grapes of Wrath. It traveled the uglier back roads of economic breakdown, from suicide to mob violence to the startling breast-feeding moment you won’t see in the movie.

Carlylse Floyd’s incendiary opera draws parallels between McCarthyism and erotophobia in Appalachia. Director Peter Rothstein’s cast was resplendently vocal. With John Donahue’s cryptic set design, the year’s best, the opera’s natural setting itself was drained of vibrant color, just as the townsfolk had replaced healthy passion with hatred of all things physical.