Wolfgang, Rodolfo, Paulo, Jeff—as teenagers, they all played Ping-Pong™. They were good. But they grew up, went to college, got jobs, came to terms with being gay, and had no time to smash a little white ball across a small green table. Eventually, though, they realized that life is more than going to work and clubs. They came back to Ping-Pong™. 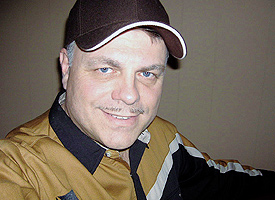 The four were rusty at first, but according to Wolfgang Busch, “It’s like riding a bicycle. You never forget.”

“My shirt is drenched when I’m done,” Busch says.

Welcome to Ping-Pong™, gay-style. It is one of three-dozen sports associated with Out of Bounds, New York City’s gay athletics umbrella group. Members play once a week, at Paradise in Sunnyside, Queens. If you didn’t know Ping-Pong™ palaces existed, join the club.

But, Busch explains, playing socially is the whole idea: “The gay community should have lots of sports. Anyone can play Ping-Pong™. It’s all-inclusive, and it gets people together in a positive, constructive way.”

Busch describes his sport as “a fascinating game. To play well, you need complete concentration. Your whole body must be focused. You must be properly positioned at all time. And it’s so fast. There’s no downtime whatsoever.”

And Busch is proud of his progress, relating, “I used to be only a defensive player. Now, I like to attack, too.”

Ping-Pong™ was not always Busch’s favorite sport. Growing up near Heidelberg, Germany, he followed the path blazed by his father, president of a local soccer club. Busch played semiprofessionally for a local team, Olympia Lorsch, but a bad back forced him to quit at age 22.

Busch moved into the entertainment field, serving as a DJ and sound engineer. At the same time, he was hanging out in gay bars, meeting American soldiers from nearby military bases.

“It was cool [in the ’70s] in Germany to have American friends,” Busch recalls. “GIs couldn’t be out, but they went to the gay bars anyway. That’s how I learned English.

Busch learned about life as well, and after several visits to new friends in the States, he emigrated in 1983.

In this country, too, sports have been part of Busch’s life. He videotaped the Vancouver Gay Games in 1990 with Lou Maletta, founder and president of the Gay Cable Network. Busch also bowled at the Gay Games.

Busch was involved in a number of nonsports projects, too, many of them music- and video-related. He produced How Do I Look, a documentary about the Harlem “ball” community that derived from the 1920s drag tradition. He was a promoter and booker at clubs like the Limelight, Palladium, Tunnel, Roxy, and Danceteria. He worked with megastars like Madonna, Mick Jagger, and Billy Joel.

However, Busch was not just a club-goer. A committed activist, he served on Manhattan Borough President C. Virginia Field’s gay and lesbian advisory council. He coordinated events for the MetroBears. And he volunteered with Senior Action in a Gay Environment (SAGE), an organization for elderly gay, lesbian, and transgender people.

It was through SAGE that Busch rediscovered Ping-Pong™. He saw the injuries suffered when older men and women fall, and didn’t want that to happen to him.

“A lot of prevention has to do with reflexes,” Busch points out. “Ping-Pong™ is great for developing reflexes.”

Diving into the sport with his trademark enthusiasm, Busch soon joined the Out of Bounds board of directors.

“It’s a great way to get publicity, and attract new players,” Busch notes. “And we always welcome people. Gay people should know Ping-Pong™ is good fun. It’s competitive, but not too serious. That’s a great combination.”

Nonetheless, in December 2007, Busch was busy organizing the first championship for his club, Ping-Pong NY. And he already is looking ahead to 2010, when table tennis (the sport’s official name) will be part of Gay Games VIII.

That event is being held in Cologne, Germany, a site with special meaning for Busch, who remarks, “Of course I’ll be there. I’ve already told my parents and friends that we’ve got a whole group coming from New York. They must get the apartments ready!”

Dan Woog, a journalist, educator, soccer coach, and gay activist, is the author of the “Jocks” series of books on gay male athletes. Visit his Web site at www.danwoog.com. He can be reached care of this publication, or at [email protected]