When playwright Wendy Wasserstein died of lymphoma just two years ago at an untimely age 55, American feminism lost its most prestigious theatrical voice. As well, American queer folk lost one of its artistic champions. Her 1989 Pulitzer Prize- and Tony-winning The Heidi Chronicles was remarkable in its depiction of straight-gay friendship, as was her 1998 screenplay for The Object of My Affection. 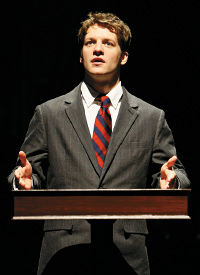 Wasserstein’s final play, Third, is perhaps her most urgent work. It shines the high beam on unconscious feminist tyranny from a feminist viewpoint—a timely topic.

I talked with Casey Stangl, director of the Guthrie’s production of Third. Regarded as a major voice in feminist theater, she returns to the quandary of feminist abuse that she mined so well in years past with Cinderella and the Glass Ceiling at Brave New Workshop and Cowbird at Eye of the Storm.

You mentioned ambitious themes in Third. Tell me about the play and these themes.

The story line is about Laurie Jameson [Sally Wingert], a professor in her 50s who is kind of a rock star in the world of academia at a very small, elite New England college. She’s known nationally as being a barrier-breaker—one of the first women to get tenure. She has opened up a whole feminist approach to literature, and prides herself on being an extremely open-minded, liberal, inclusive person.

She has a young man in one of her Shakespeare classes, Woodson Bull III [Tony Clarno], and he’s nicknamed “Third.” She takes an instant dislike to him, just because he represents what she considers to be the old guard—privileged, preppie, frat boy. He turns in a paper on King Lear that she believes he’s not smart enough to have written, and accuses him of plagiarizing.

Then, she is forced to confront the fact that like most of us, she has her biases and prejudices—and that she tends to put people in boxes and labels them in a way she accuses other people of doing. And she turns out to be really wrong about this young man she did a snap judgment of. She’s really thrown for a loop by that, and is forced to examine that she’s become as rigid in her thinking as the very people she accused of being rigid.

I think it’s a very ambitious and provocative thing for Wendy Wasserstein to have written, because in many ways, she was a rock star in her world. She was very liberal, outspoken, politically aware, left-of-center, as was much of her audience. And I think it sort of challenges those very people. She is courageous in saying, “Look, I think we may have gotten rigid in our own way.”

There’s a really amazing passage in the play in which Third basically says to an assembled group that he believes this kind of thinking is why the Democrats have lost the country. Because when people like him—a middle-of-the-road, on-the-fence politically, Midwestern athlete, just kind of a regular guy—comes to them with a question, as he calls it, he’s dismissed before he even gets to ask the question.

You mentioned that Wasserstein is reaching for a larger world.

She talks about themes that are not just about right now. They are definitely very much “of the minute” political and social issues that are addressed in the play. But I think that in placing it in this Shakespeare context, it gives this sort of largeness and universality about dealing with our mortality, about relationships between parents and children—specifically, father-daughter and mother-daughter. And I think they’re themes that haven’t always been a part of her writing.

Do you think she sensed her time was limited when she wrote Third?

Definitely. She knew she was dying when she wrote the play. In fact, she died like six weeks after it opened at Lincoln Center. She definitely knew the end was near. She was facing her own mortality.

There’s this very poignant line where Laurie says to Third, “I thought I was going to change the world, but all I did was change the English Department.”

I think that Wendy had those feelings—that she believed in her youth that the optimism of the ’60s and the early ’70s was going to literally, completely change the world. And I think, especially, in her view, in the current administration and these regressive times, as she would call them, she found that sad, and wondered what all our work has been for.

I understand that, but I think there’s beauty in that she wrote this to instruct those of us who “get” her—to say, “Hey, folks, this is an internal problem you’ve got to address.”

Absolutely. One of the things that I think she manages to do in the play, which I think is really successful and skillful, is present these questions and challenges to a liberal audience, but, at the same time, evoke and very much put out there her very strong political belief about a regressive administration and the times we live in.

What she’s trying to say is that in our despair and outrage, we cannot become so rigid in our thinking so as to alienate the very people that we’re trying to bring into the fold. If we just continue to preach to the choir, then what’s going to happen is what happened—that we, in her mind, lost the country.

It’s too bad she didn’t live a little longer, because I do sense something is changing in the air that she would find profoundly hopeful. She has a kind of mature and wise caution to all of us who are continuing to carry that torch: Keep our minds open. Keep an open perspective, and not have knee-jerk liberal reactions.

This bleeds into more timeless themes. If we get so caught up in our rage and our despair, we basically lose sight of smelling the roses. As soon as we do that, we lose ourselves, and then, therefore, we lose others as well.

There’s a line in the play where someone says, “This is not an optimistic time,” and someone replies, “But it’s the only time we’ve got.”