One of the key advantages of the framework of a large university is the ability to do almost anything. When it comes to fields of study, students at the University of Minnesota-Twin Cities have a plethora of choices.

The same goes for housing. Offerings range from dormitories to graduate apartments, with housing themes based on a number of cultural, academic, and social commitments and affinities, called Living and Learning Communities. 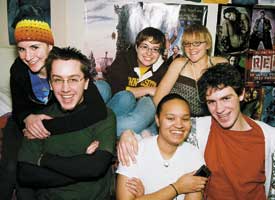 This academic year, for the first time, students had the option of choosing housing and programming around the themes of gender identity and sexual orientation.

They took up that option in droves, according to Ben Falter, Residence Director of Comstock Hall, the Minneapolis campus dorm that houses 597 students, including the 21 residents of so-called Lavender House.

Residents, who range from first-year undergraduate to first-year graduate school, say they appreciate living in a space that encourages honest expression and conversation.

Resident Nathaniel Brandner, a first-year student majoring in linguistics who hails from Marsfield, Wisconsin, notes, “It’s neat to be able to talk to people, and not be afraid to express your identity. Sometimes, with relationships with straight people, you come to a border. This is a community where everyone is open to virtually every identity.”

Perhaps as a result of that openness, residents share a community-wide bond that they observe is relatively unique on campus.

Sophomore education major Louisa Quast, a native of St. Louis Park who moved into Lavender House through a roommate switch, explains that the change in spaces has been pronounced: “We all hang out, and we all get along so well. It’s been really fun, especially since I moved from my old room to my new room. The number of people I come and see every day has just quadrupled. I think we are by far the most social floor in Comstock.”

Quast’s roommate, first-year student Lauren Berger, from Milwaukee, Wisconsin, who hasn’t decided on a major, but is planning on a minor in GLBT studies, adds, “We are the only floor that goes to dinner with 20 people,” and finds living in the house is helpful in “opening up connections.”

Lane, a native of Southfield, Michigan, who did her undergraduate degree at Michigan State University, relates that living in the Lavender House doubles as a way of building local ties, and of facilitating her own organizing.

Johnson, who cut her teeth retooling her Mankato high school into an active presence, and is in her first year at the University of Minnesota, has wasted no time, cofacilitating the queer student group Gopher Pride as well. She points out that Lavender House’s emphasis on developing simultaneous, intertwined identities creates a great space for growth in community.

The range of possible identities, of course, includes that of straight ally.

“I had to come out straight,” Berger states matter-of-factly, over the laughter of her neighbors. “My roommate [Quast] didn’t believe me. I had to pull out an essay I’d written about being an ally as proof!”

But Berger is far from the only one to understand or emphasize the importance of political and social solidarity that comes with queer politics and community. 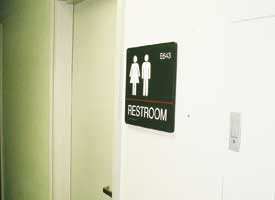 The Lavender House concept, Johnson recounts, emerged from the ongoing work of the Transgender Commission, a working body convened in March 2006 in concert with the University’s GLBTA Programs Office. Among the Commission’s highest priorities is the proliferation of inclusive, gender-open spaces—particularly accommodations—for all people. Enter the concept of housing with gender-open bathrooms, and you’ve got a Lavender House on your hands.

As Johnson shares, “I like the fact that the whole reason the Lavender House started is because the Transgender Commission started. This is space safe not only for us [GLBT and allied people]. I don’t identify as transgender, but many of my friends are. I’m very close with many of those issues. It’s important to have a place so open for you not only to express your sexual identity, but your gender identity. We have gender-inclusive bathrooms, and it seems to have been well-received, pretty much throughout the building.”

Falter concurs, crediting the Transgender Commission with working to realize a longstanding desire for housing around the themes of sexual orientation and gender identity: “We want people to use the restroom that they feel most comfortable in. Housing has talked on and off for probably like 10 years about whether something like this should exist,”

A three-year veteran of work in residential life at the University of Minnesota and a member of the Transgender Commission’s housing work group, Falter recalls, “It was never something that had come to fruition, but not because it was something that hit the cutting-room floor, if you will. It was just that no one really acted on it, to be honest. At the first meeting of the Transgender Commission, a lot of folks from Housing showed up. The conversation came to, ‘Hey, we don’t have a gender-free living environment for students.’ That kind of stretched into, ‘Let’s look into this a little bit more. Why don’t we have a GLBTA Living and Learning Community?”

With the energy of the Transgender Commission behind the project, as well as broad institutional support, Falter remembers that getting the Lavender House concept off the ground was likewise something of a whirlwind.

Falter muses, “To go from initial conversations in March 2006 to having the information we needed months prior to the fall opening date is really remarkable. It’s really significant for a Living and Learning Community to develop on our campus in that short a time span. We moved really fast, and pretty much had it green-lighted ever step of the way. The climate within Housing is very open. We have really good GLBT allies, and we’ve been doing social justice retreats for a long time. It’s very easy to do here, as opposed to some other institutions that my friends have worked at.”

The students, for their part, continue to show the sort of interest that has animated student organizing around GLBT and queer issues throughout the institution’s history. Successful and persistent student, faculty, and staff organizing at the University in the late 1980s and early 1990s—around military recruitment on campus, harassment of queer students, and domestic partner benefits—led to the creation of the GLBTA Program in the first place. That historic and ongoing work has touched many more aspects of the life of the University.

For Brandner, who serves on Comstock’s Community Council, a commitment to inclusion pervades his experience: “I was in couple of leadership groups in high school, but none of them seemed inclusive of everybody. Even reading some of the docs that we get as council members—‘Try to be gender-inclusive.’ You don’t want a dance that says people must bring a date. Some people don’t date. Some people aren’t public with who they date. There are things I didn’t think about in a high school group that are present here.”

Brandner is far from alone. If anything, residents tell, interest in programming like Lavender House is snowballing.

As Falter puts it, “Right now, we’re trying to see if we should expand it. We strategically picked Comstock, because it’s close to the Queer Student Cultural Center, it’s known as more of a quiet building, and we have a lot of ability to expand.”