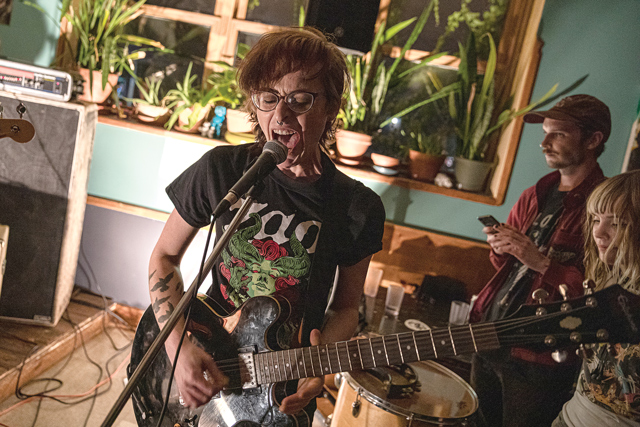 Natalie Krueger has been a stalwart in the local punk and metal scene for the last several years, performing as a singer, instrumentalist, and songwriter. Photo by John Oakes

Long before discovering her calling in the world of punk rock and heavy metal, Natalie Krueger was growing up in a world that, by all accounts, would seem diametrically opposed to that culture of musical rebellion and nonconformity.

“My family moved around a few times when I was a lot younger, but both my parents have roots in Minnesota and ultimately decided to settle here,” said Krueger. “They were both evangelical ministers and much of my time growing up was spent in the church. That life was all I knew, and I assumed I would go to bible college and become a minister like my parents. Instead, I discovered punk rock and metal, and was exposed to people and ideas the particular brand of religion I was immersed in tried to shield me from.”

Because of this clash of mores and lifestyles, Krueger said that she experienced a years-long internal crisis, ultimately not going to college and instead becoming a full-fledged musician. Krueger said that her brother was the reason she got into music in the first place.

“He’s a drummer and would bring home CDs of bands that played styles of music I had never experienced before,” said Krueger. “That’s where I started discovering punk and metal. I tried picking up guitar and bass when I was a teenager, but really lacked an environment where that could be fostered, and instead any musical skill that was developing was strictly used in service of our church. That and any guitar teacher my parents thought was Christian enough could barely inspire a rock to lay in the dirt.”

Because of this roadblock, Krueger said that she stopped any serious attempt at becoming a musician, occasionally playing music for herself. That was until a particularly stressful time in her life necessitated the use of music as a creative outlet.

“A friend of mine had some demos that were left unfinished and I asked if I could do vocals for them,” said Krueger. “It turned out that I was really good at screaming into a microphone, and a few months later we decided to turn it into a real band. Eventually I picked guitar back up and taught myself how to play keys. I still feel like a beginner oftentimes and there’s a lot I have to learn, but getting into a room with my friends to write music and create art is where my passion lies.”

And that passion is still white-hot for Krueger, who has carved out a pretty versatile career as a stalwart in the local punk rock and metal scene. Krueger, who primarily plays hardcore punk but has ventured out into other genres, made her first foray into this world in 2015 with the band Näive Sense.

“To me, there was always this specific artistic purpose behind that band,” said Krueger. “We would write all of our songs spontaneously in one practice session with very few revisions. I ended up quitting that band in favor of playing my new group Contentious. Whereas Näive Sense was far more experimental and pushed boundaries, Contentious more musically straightforward and far more orthodox in its approach.”

Krueger said that the best part about performing with Contentious was that it was an all-queer band, and for an openly transgender musician working in a musical genre that has historically and occasionally had problematic attitudes towards queer and trans folk, it was clearly an optimistic sign that the times were changing.

“Years ago, I was working at a coffee shop off 24th and Lyndale. Karri Plowman, the owner of Twin Cities Leather, was one of my regulars,” said Krueger. “We became good friends, and when Leather & Latte was coming together, he invited me to come help set up the coffee end of things. It was the first time I had ever been that immersed in an LGBT environment and just felt right at home.”

Krueger said that it wasn’t long before she came out as transgender, having always known who she was, but not necessarily being able to articulate it until later in life.

“I won’t say it was easy,” said Krueger. “I lost friends and family that to this day are not a part of my life. But I ended up getting the chance to live a far more fulfilling life just being myself.”

Fulfilling, indeed: since breaking out into the world of punk music, Krueger has amassed an impressive CV as a singer, instrumentalist, and songwriter.

“Towards the end of Näive Sense, I had started writing some of the music and playing guitar for a couple songs and even wrote a few riffs for Contentious,” said Krueger. “I wanted to keep doing that so I started the band Sleep Debt and spent a few months as the touring guitarist and keyboardist for the Chicago rock band Typesetter. As for what I’m doing now, I recently started a band called Dana Sterling. We’ll be releasing music and hopefully playing shows later this summer or fall.”

Today, Krueger has asserted that both the punk and metal scenes have a growing LGBTQ presence, though it’s still not without its more toxic elements.

“That’s to be expected from genres of music that [would] typically glorify toxic masculinity and heteronormative male rage,” said Krueger. “However, to me at least, being accepted isn’t necessarily the point of punk rock. To me, the whole point of being queer in a counterculture space is to unashamedly exist and push back against mainstream narratives of who we are all supposed to be. Whether or not I’m accepted is always secondary. What I care most about is being true to myself regardless of the consequences and letting my music be an extension of that.”

Indeed, the traditional ethos of punk rock is to push against the grain of conformity and embrace your inner iconoclast. For those in the queer community who want to follow in the footsteps of Krueger and those like her, Krueger says that they don’t need to wait for permission to do so.

“I think back to those in our community who sacrificed their safety, well-being, and even their lives for things to get better,” said Krueger. “I’m sure they were terrified but they stood up against people and institutions that had nothing but hate towards us. We not only owe it to those who came before us to get on stage and cause a scene but to those who will be following in our footsteps. Hell, you owe it to yourself.”