Did you know that
Minneapolis is home to more Tony Award-winning Regional Theaters than any city in the nation? Those three, the Guthrie, Children’s Theatre Company, and Theatre de la Jeune Lune, are world-class and world-renowned. They also have good records for inclusion of queer-oriented material ranging from overt gay themes to hard-hitting crossgender casting that portrays sexual ambiguity and desire vividly. Not to mention that the Guthrie’s new facility on the Mississippi River is breathtaking. 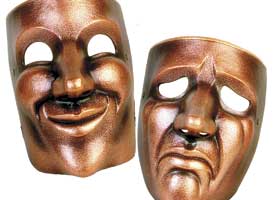 That said, having these three great houses means that the standard all over the Twin Cities is much higher than the national average. According to Scott Mayer, founder of the Ivey Awards for Twin Cities theater, there are over 71 professional theaters in the metro area. The Twin Cities has more theater seats per capita than any other US city outside New York.

Meaning, you get Broadway and Off-Broadway caliber shows from other local smaller theaters. For instance, when it comes to speculation about which local theater will win the next Tony, St. Paul’s Penumbra, the nation’s flagship African-American theater, tops the list. Yet another theater with solid queer content credentials in its history.

On a par in queer content and artistic brilliance are the Jungle, Pillsbury House, Red Eye, Mixed Blood, and Illusion Theater. Illusion is downright prolific in its output of queer-sensitive and HIV-AIDS-based work. Pillsbury House, Mixed Blood, and Illusion have pioneered long and nationally in multi-racial and multi ethnic themes, often blended with concerns of gender and sexuality.

The Twin Cities has had niche theaters for gay and feminist issues since the 1970s: the fabled Out and About group for then, “gay” issues (before the “GLBT” and “queer”monikers emerged); and the At the Foot of the Mountain, a deep-feminist, hence, naturally queer-inclusive group that reached national acclaim.

That tradition still holds with Outward Spiral Theater Company, which has been around for 13 years. They’ve halted traditional seasons of play productions to focus on community events such as Pride and Transgender Day of Remembrance. Their edgy and passionate youth performance troupe, Empowered Expressions, plays often at Patrick’s Cabaret. 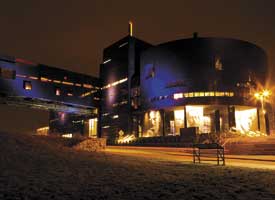 Patrick’s is truly a Twin Cities queer theater story of historical consequence. In 1986, Patrick Scully created a venue for queer and avant-garde dancers, writers, performance artists, musicians, and more that nurtured some brilliant talents and still does. Indeed, the Cabaret was the focus of the right-wing Republican-driven so-called Culture War. Rush Limbaugh and Senator Jesse Helms, in their attacks on the National Endowment of the Arts, were infamous for the misinformation they put out on queer-driven art right at Patrick’s. The Ron Athey controversy at Patrick’s old site in 1994 created a national uproar. The new site is right on the light rail line.

Patrick’s Cabaret’s compatriot in the “Culture Wars” was the Walker Art Center, whose then-performance curator, John Killacky, made the Walker a sizzling venue for queer performance. Thankfully, Killacky’s legacy is carried through with present curator Philip Bither. Always check the Walker’s schedule, because you will frequently find the most amazing performances from different parts of the nation and the world dealing with non mainstream subject matter. January’s annual Walker Out There series is the best opportunity for unique performance from outside the Twin Cities.

Feminist theater is, of course, a natural fit for queer folks, and At the Foot’s legacy is well-tended with our most senior feminist troupe, Frank Theatre. Though some will argue that Frank is also about politics, mysticality, and social issues, it still draws from a deep consciousness about women’s marginalization and does so brilliantly. Another Tony-contender, frankly.

However, Theatre Unbound has emerged in recent years as an exclusively feminist troupe with a consistently high standard of excellence. Theatre Pro Rata consciously maintains a feminist consciousness in their season selection with superb productions of feminist classics like Machinal and Dusa, Fish, Stas, & Vi. The wonderful Starting Gate Productions has also done similarly with both gay and feminist content in their seasons. The wild and crazy Bedlam Theatre, right on the light rail line, is aggressively feminist and queer. And the new kid on the block, the 20% Theater, was recently named among The Best of Lesbian Regional Theaters by San Francisco-based Curve Magazine. Indeed, productions by lesbian dramatists Carolyn Gage and Paula Vogel were stunning.

You’ll also want to mark your August calendar for the Minnesota Fringe Festival, which is always packed with loads of queer content, much of it marvelously brazen. Also brazen, at times, in terms of sexual and gender-oriented subject matter—and this may surprise you—is Interact, the region’s premier theater for persons with disabilities. Then there’s Intermedia Arts, which is known for frequent work deriving from those realms too.

Other high-caliber theaters that are queer-inclusive and high quality are History Theater, which premiered Farm Boys; Burning House Group; Theatre in the Round (TRP); and Park Square; which locally premiered Love! Valour! Compassion! years ago, hence making it easier for larger theaters to include queer plays. Various higher ed venues, like the University of Minnesota Theater Department also include queerwork. TRP and Burning House have recently staged splendid revivals by iconic gay playwright Joe Orton.

For musicals, the religion of many a gay man, Bloomington Civic Theatre, Minneapolis Musical Theatre, and Theatre Latte Da are the best bets. The Hennepin Theatre Trust and the Ordway Center bring in big Broadway tours like the upcoming Jersey Boys and The Drowsy Chaperone. The Ordway is also a marvelous space for the development of musical theater. And the Chanhassen Dinner Theaters, the world’s largest dinner theater complex, is a treasured and delicious gatekeeper of classic musical productions.