According to one global warming Web site, the United States contains only 4 percent of the world’s population, yet creates 22 percent of the world’s greenhouse gas emissions. Although industries probably account for much of those total emissions, and are responsible for more than half of our water pollution, individual consumers can help the environment significantly. 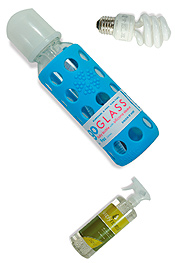 Ryan North, co-owner of Twin Cities Green, which opened last October, says, “If you live in an apartment that doesn’t have recycling, if you collect your cans and bring them to your parents’ home that has recycling, even that’s something.”

Twin Cities Green is stocked with practical and affordable products to make living green a little bit easier, even for a nation of dedicated consumers.

Inspired by the success of their first business venture, award-winning Re-Gifts, husband-and-wife team Ryan and Tina North decided they needed a second retail space for the things that didn’t fit into their original concept.

If switching to fluorescent lightbulbs sounds insignificant, think again. Simply replacing three frequently used light bulbs with CFLs can save 300 pounds of carbon dioxide, not to mention $60 every year. What’s more, if every home in America replaced just one incandescent lightbulb with a CFL, in one year, it would prevent greenhouse gas emissions equivalent to 800,000 cars. For those who experimented with earlier models of CFLs, but couldn’t use the spiral shape, or needed a bulb that would accommodate dimmer switches, Twin Cities Green stocks traditionally shaped and dimmable CFLs.

Ryan North explains, “A lot of moms are a little hesitant—they think their babies are going to drop it, and break [the glass], but it’s thick glass, and it comes in a silicone wrap of different fun colors, so it lets the baby hold it a little easier.”

North, who is a parent, urges, “Do a Google search on some of the research findings on some of the bigger-name-brand bottles, especially after time—there are nasty things leaching out. Bottles go through freezing and heating, and that releases and stirs up things you don’t want going into your baby.”

With all the products available, North admits the green movement can become overwhelming, which is why he resists the impulse to get preachy. Instead, he encourages his customers to do their own research online, in addition to the information available at the store or its Web site.

“You should do as much as you can, but not more than you can,” North advises. “We’re all tied to our budgets, but I think anything you can do helps, and you have to feel good about that.”