Trust In Your Lawyers

Trusting a lawyer may be the last thing you would think of doing, considering most contacts many people have with lawyers are geared more toward the negative aspect of the law. But with The Molever Law Firm—which consists of three attorneys, Jeffrey Molever, Cathy Molever, and Kimberly Frank; two paralegals, Jan Haag and Megan Esterberg; legal assistant Susan Johnson; and client communications coordinator Eleanor Sequeria—trusting in them is exactly what every GLBT person should want to do. 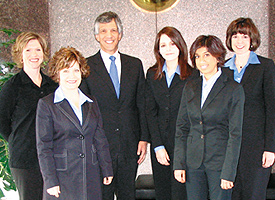 Recently formed Project 515 has pointed out that in Minnesota, more than 500 laws directly or indirectly negatively affect the GLBT community. Whether it’s health care, child care, insurance, or taxes, laws in Minnesota just aren’t set up to benefit the GLBT persons.

According to Jeff Molever, the laws aren’t necessarily “against” GLBT individuals, but when it comes to the laws, “they would treat them as strangers.”

In other words, your loving partner of 20 years is no more important than the person you stand next to in line at the supermarket when it comes to the law.

Molever continues, “There can be situations where it can really go against them. A person can be married, but still have a partner. The law will bump over the partner, and give it to the spouse, even if they are separated for 20 years.”

The same is applied when it comes to partners versus family. Without anything in place, the law typically will place a person’s closest living relative in charge of everything, ignoring the partner, no matter how long the couple have been together.

This is where The Molever Law firm comes into the picture. Focusing on estate planning, it handles some of the most important aspects that the GLBT community has to take special care with, such as asset protection and tax planning. Whereas a married couple will have laws that specifically protect them in times of need, GLBT couples have to take extra steps to ensure the same protections are met—and they can be met.

Frank states that The Molever Law Firm’s Trusts can be even more protective for surviving partners in GLBT relationships than the ones they create for married couples.

Molever says no one has to wait for the laws to change, nor does he presume the laws ever will be exactly what everyone wants. He does suggest for clients, “They can put a thorough plan in place now.”

But Molever doesn’t mean simply writing up a will, either. He believes everyone, GLBT or not, should consider using a trust, because it is much better than a will for two reasons. The first is that wills often get contested—all the heirs can get involved, and fight it easily. Secondly, a trust is very challenging and expensive to contest.

A trust can be used to include or exclude whomever the person setting up the trust wants. It also can be used to protect assets for tax purposes. This is very important to GLBT couples, Molever emphasizes, because the laws aren’t set up to give GLBT couples the same protections as married couples.

Molever relates that he currently is dealing with a situation where a GLBT couple had an agreement in place by which, upon their separation, they would split the property. Because the agreement was in place, neither person is able to claim sole ownership of the home, and leave the former partner with nothing—a common problem many GLBT couples face after years of creating a life together.

Though the laws are changing in places like California, Massachusetts, and Vermont, Molever observes that changes in the laws are “not happening as fast as I would have thought; it’s not a wave going through the country.”

These problems extend beyond property and money. They also extend to the medical side. The law is set up so that without any prior arrangements in place, a person’s closest relative, usually a parent or sibling, is given permission to decide someone’s health care if that person is unable to make decisions for himself or herself. This means that with GLBT couples, the partner is overlooked, and the decisions would go to a relative of the individual. With married couples, the husband or wife would be given that permission.

Molever mentions the HIPPA (Health Insurance Portability & Accountability Act) laws. They prevent anyone, including children, spouses, and partners, from having access to medical records. The law does provide a way around it, however, by a person simply saying who gets access to his or her medical records in a document that authorizes individuals to receive health information.

As for children, The Molever Law Firm would suggest that the parents of children ensure both of them are legally considered the parent.

So how does one set up a trust?

It’s quite easy, actually, and The Molever Law Firm can help make it even easier, offering a few tips when doing so.

First is control. Molever explains, “This means setting up the right people for trusteeship and property power of attorney.” This gives whomever a person chooses the power to sign his or her name on any asset or for any financial decision. The problem most people don’t realize is that the form available is not the one to be used, unless a person wishes to give someone an immediate power of attorney the second the form is signed. Molever recommends actually drafting a document to specify when the power of attorney is to be used.

Second is distribution, or deciding where your assets are to go. By placing all this in a trust, and through the subtrust concept, a creator of a trust can protect his or her beneficiaries’ shares from creditors in case of illness or lawsuits. Molever points out that the individual can be trustee over his or her own trust, even though most people and some attorneys mistakenly believe otherwise.

The Molever Law Firm doesn’t charge based on what is going into the trust, but simply for how the trust is set up, a benefit for the wealthy GLBTs among us.

Unlike a general practitioner, The Molever Law Firm handles 90 percent estate planning cases, and knows how best to protect you where the laws don’t.