The most important thing about the Employment Non-Discrimination Act (ENDA), Mara Keisling told a crowd at the University of Minnesota Law School, is to change the name. “Everybody in Washington is really working very hard to get the name changed to the Marginalized Americans Rights Act, or MARA,” the Executive Director of the Washington DC-based National Center for Transgender Equality (NCTE) said to loud laughter from the several dozen who heard her speak on March 31 at a Town Hall Meeting on Transgender Rights. 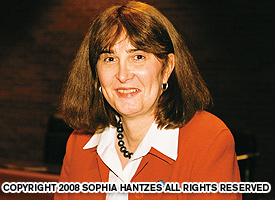 “I mean,” Keisling added, “we want to add trans people back in, but really, changing the name, I think, is what we’re going to focus our time on.”Keisling continued cracking jokes as she talked about NCTE’s federal policy priorities before returning to the subject of ENDA. She is one of the key players in the battle to make sure the proposed legislation bans employment discrimination on the basis of sexual orientation and gender identity, not just the former.Last September, the nation’s largest GLBT organization, the Human Rights Campaign (HRC), announced its support for a version of ENDA without gender identity—just weeks after assuring Keisling it would stand firm on the issue.But “the flinch moment came, and they flinched,” according to Keisling.

With HRC’s support, the bill passed the House. Since then, 375 GLBT groups have signed on to a letter opposing ENDA without gender identity.“When people say, ‘I understand there’s a split in the GLBT community,’ I say, “No, there’s not. It’s one rogue organization,’” Keisling related.Although HRC is the biggest and most well-connected GLBT group in the country, Keisling pointed out, others have longer résumés of passing successful legislation—and they all think the strategy was, in her words, “weak and counterproductive.”The argument is that with gender identity, ENDA never could pass.“

That’s just false,” Keisling stated.There were enough votes in the House for passage. The concern was that the Republican minority would maneuver to send the bill back to committee, effectively killing it. The same concern came up over the Hate Crimes bill in 2007, but Keisling and others persuaded members of Congress to leave gender identity intact.As Keisling recalls, “They said, ‘Fine, we’re going to let it run, but we think it’s going to crash and burn.’ It didn’t. It passed the House. Later, it passed the Senate.”The bill stalled, not because of gender identity, but because the Senate version was attached to a defense authorization bill.

And ENDA would not have become law regardless, Keisling noted: “Nobody in Washington—zero people—thought there was any chance of this bill passing and becoming law.”Even if it got through Congress, the President would veto it, Keisling observed.

As Keisling remarked, “It was never, ‘We will protect somebody or nobody.’ It was, ‘We will protect nobody and keep our principles, or nobody and abandon our principles.’”Although Keisling emphasized her support for HRC, and the good work it has done in the past, she commented, “But they need to be spanked. Staying at the table does not mean locking your brothers and sisters outside, and eating their dinner. Is the most important thing to have good contacts in Washington, or to use those contacts to help your people?”But Keisling has been impressed by the support and activism from those outside HRC, musing, “Maybe it really is a GLBT community. Maybe they really do have our back.”

And Keisling believes the dispute mobilized people like never before.“We provided the intelligence in Washington, but the real work was being done in Minneapolis, in Duluth, in…”—she hesitated, unable to name another city in Minnesota, and finished to laughter—“…in other places like that.”The Senate will debate ENDA without gender identity, but Keisling is confident it will fail, giving the community a chance to restore gender identity to the bill by 2009.“The bad bill is not going to become law this year,” Keisling concluded, then quipped, “I would be willing to bet your life.”