Community health is often the starting point—and the catalyst of renewal—for community organizing that positively transforms society. Think of the often-interrelated efforts to address HIV/AIDS, environmental racism, or massive disparities in access to health care. For many transgender and gender-variant people, engagement with health-care institutions and professionals is central to physiological health and, indeed, to overall well-being. 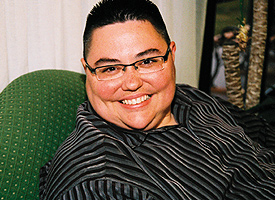 It prompted transgender activists to form the Minnesota Transgender Health Coalition (MNTHC), which is hosting the second annual Transgender Community Health and Wellness Fair on May 9-10 at South High School in Minneapolis.

MNTHC Board of Directors Secretary Breonna Mason says, “The motivation has always been in response to the attitudes we’ve encountered and the experiences we’ve had. The medical professional is so much a part of our lives.”

MNTHC Cochair Max Gries notes that engagement and partnership with supportive health-care professionals is among the key themes of this year’s fair. Touting access as a key priority, Gries points out that several health professionals have agreed to free 15-minute consultations with fair attendees.

Among the workshops on May 10 are a number on approaches to successful transgender-patient advocacy.

“We’ve worked to bridge the health-professional community and the trans community,” Gries relates. “In fact, a number of our members are transpeople who are also health providers. This idea of ‘us versus them’—we’re working to blow that apart, to break down some of those barriers, and sit at the same table.”

Dr. Marci Bowers and Dr. Loren Schechter, two surgeons who will be in town to conduct professional education at the University of Minnesota Program in Human Sexuality, will present at the fair.

Bowers, a widely recognized obstetrician/gynecologist who works in Trinidad, Colorado, will deliver the keynote address on May 9. A graduate of the University of Minnesota Medical School, where she served as student body President, Bowers is looking forward to returning to Minnesota to do both community-health and professional education.

For Bowers, who is a transgender woman, her commitment to this work draws on both ethical convictions and lived experience.

“This is an interest in just doing the right thing for humanity—honestly,” Bowers states. “The fact that I went through things is interesting, and it gives me a nice bit of empathy and an important perspective. It probably puts me a bit more invested in patient outcomes as well, because I know what it means to people to go through this.”

Schechter, who works in the Chicago suburb of Morton Grove, Illinois, points out that accessibility also drives much of his work. His practice encompasses a spectrum of procedures, including primary gender-confirmation surgeries along with secondary procedures such as facial reconstruction.

According to Shechter, cost barriers for trans patients—as well as barriers for trans-friendly physicians who need support from medical institutions and affordable malpractice insurance—have motivated him to act on insurance issues. He is working with the American Medical Association to pass a resolution recommending insurance coverage for transgender surgeries.

Transgender/labor activist and special guest André Wilson, who delivered the keynote at last year’s fair, likewise will address insurance reform in his presentation “Getting Us Covered: Advocacy for Trans-Inclusive Health Insurance.”

Working with the University of Michigan’s Graduate Employees Union, in 2005, Wilson famously helped secure health-care coverage for transgender transitions. He since has taken the fight across the country, working with local teacher’s unions to add transgender-inclusive nondiscrimination language to contracts and employment policies.

Recognizing the importance of basic access and accessibility for all animates many of the commitments that shape the conference.

South High School, which is wheelchair-accessible, is near the 21 and 22 bus lines, as well as the Lake Street light rail stop. The school’s parking lot has substantial disability parking.

To ensure the health of people with chemical sensitivities and allergies, the fair is “scent-free,” meaning no perfumes or other scents should be worn.

Changing the fair to move toward accessibility for more people shows how acknowledging and engaging diversity—be it in ability, class, or parental status—can be a transforming social force. This sort of respect also is reflected in how supportive health-care providers talk about their work in and with trans communities.

“Diversity within the transgender population and the diversity of partnering never cease to amaze me,” Bowers shares. “There’s just a lot of human variation. As I’ve often said, there’s no one way to go through a gender transition, and there’s no perfect speed at which to do it, either.”

Such recognition of the right to health for people in the transgender and gender-variant communities is intertwined with organizing for the broader right to overall wellness for them.

The fair includes performances from celebrated poet and activist Andrea Jenkins; TransVoices Chorus; and Empowered Expressions, a group dedicated to giving voice to queer youth and cultivating community, which emerged from a partnership between Outward Spiral Theatre Company and District 202.

Though only in its second year, the fair seems to be making waves already. Mason remarks that organizers from as far as New Mexico are coming just to learn about community-based approaches to trans health in Minnesota.