A 30-year-old singer with the voice (and looks) of an angel, Stewart Olerich is well-known in our community. He performed with the popular group DiscFunktion, which disbanded after a number of years of musically enchanting audiences. He was a talented karaoke host with Mia Dorr’s Premier Entertainment. He also bartended at the Brass Rail. 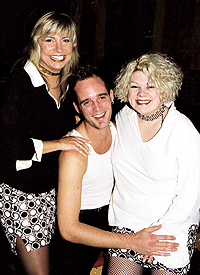 Late last year, an unkind twist of fate befell this all-around nice guy when he was hospitalized with bacterial meningitis. It caused him to lose his hearing—an absolute necessity for a singer, of course. On Valentine’s Day, he received cochlear implants in his ears, but only time will tell how much of his hearing they will restore.

On April 6, the Town House, in conjunction with members of Triangle of Hope, is hosting a benefit for Olerich to assist him with expenses.

It gets under way with Mother Pearl’s Bingo from 3 to 5 PM. All proceeds go directly to Oelrich.

Throughout the event, raffles will be conducted for fabulous prizes. To donate prizes, e-mail [email protected].

If you’re unable to attend the benefit, donations to Oelrich may be sent to him care of Dana Pagitt of Premier Entertainment, 241 Yosemite Circle, Golden Valley, MN 55422

Let’s all turn out to give to this wonderful man who himself has given so much to our community.