The Secret Is Out, One Voice Mixed Chorus Sings

“For whatever reason, One Voice Mixed Chorus has been the best-kept secret in the Twin Cities,” member Jen Rivera says. “Not many people know about us. But we don’t want to be a secret anymore!” One Voice Mixed Chorus (OVMC), formed in 1988 as a reason for the gay and lesbian communities to come together, in time expanded to welcome bisexuals, transgender individuals, and others that scarcely were recognized at that time. Today, nonprofit OVMC, which has become a successful group of more than 90 members, is considered one of the best GLBT choruses in the country. 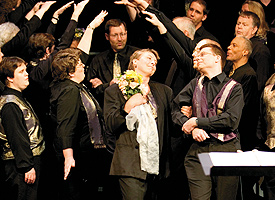 OVMC is unique in that it not only has GLBT members, but also a substantial number of straight allies who sing or volunteer. What the chorus calls the “fifth section” consists of about 40 to 50 persons who do not wish to sing with the group, but volunteer to usher, sell tickets, set up risers, and do a myriad other activities.

Cheryl Winch, Chair of the OVMC Marketing Committee, sees the chorus as a unique organization that is an asset not just to the GLBT community, but to other choruses nationwide as a model for outreach in their own community and collaboration with other organizations.

Winch explains, “We find other choruses aspiring to be like One Voice. They want to be to their communities what we are for ours. They see our vision for social change, and how it carries us beyond the realm of entertainment. They want their audiences to depart a concert like [people do from] ours—with the warmth of a shared community, as well as a sense of hope for their own lives, individually and collectively.”

This June, OVMC will be celebrating its 20th anniversary. The concert, themed Old, New, Borrowed, Q, will bring back some old favorites, as well as some new and musically challenging pieces.

This anniversary is a big one for OVMC, because much progress has been made in the past 20 years within the GLBT community, and members attribute some of this success to the group’s advocacy.

“We’ve seen a great deal of positive change over the years in our community, and have the audacity to believe that One Voice has had a role in creating some of that change,” Winch notes. “It’s so very empowering to be a part of something like that.”

The group is welcoming to all, and prides itself on being a second family to the members.

As Rivera puts it, “I would never have thought I would find the kind of unity that I’ve found with OVMC. Their integrity and closeness has created a place of comfort—a second home.”

“This is a place where there are many options—challenges for those who need or want them, different hats for different people, and even the opportunity to say no sometimes,” Winch adds.

The mission statement of One Voice is: “Building community and creating social change by raising our voices in song.” Accordingly, the chorus strives to maintain and work toward that goal in everything it does. Rivera points out that the statement dictates everything, from the songs the group selects to where it performs. OVMC is determined to educate and expose its community

“One Voice is a wonderful, wonderful place to start a journey for people longing to be a part of this community!” Rivera exclaims.

Scott Chamberlain, OVMC’s Development and Public Relations Manager, relates that as with any organization pushing for a greater good, challenges exist.

“We make it a strong point to perform in places where we are uncomfortable or unexpected,” Chamberlain observes. “We try to reach out to schools and church groups, and have an ongoing dialogue with those we are performing for, to be open about who we are and what we’re trying to do.”

Chamberlain concludes, “We’re not just a singing group, and not just a GLBT advocacy group—we are the best of both worlds. We are a living example of how people can change the world, and do so through music.”