The Secret Fall of Constance Wilde: Rethinking the Queer Myth of Oscar Wilde

The myth of Oscar Wilde (1854-1900) is a double-edged sword. Queer culture and the literary world rightly proclaim the 19th-Century Irish playwright as an icon. His conviction on the charge of “gross indecency” (code for homo sex) was perceived by many to be a sham comprising coerced crossdressers and studly hustlers. Therefore, Wilde has been vindicated as a wounded hero of artistic, sexual, and personal freedom—and of privacy rights in general. 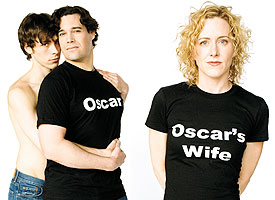 That said, Wilde’s life on the wild side in the “gay” 1890s contrasted with a “House Beautiful” on London’s Tite Street graced with an adoring wife, Constance, and two sons. Regrettably, when Wilde was sentenced to two years of hard labor, she was shattered financially, as well as severely weakened by a fall down a flight of stairs. The sons were sent abroad. The price the whole family paid for Wilde’s indiscretions was horrendous.

We love to reflect on Wilde’s wit and irreverence. However, we also should consider the price that not just he, but also his family, paid, and the circumstances that led to it all.

That’s why the Guthrie’s staging of The Secret Fall of Constance Wilde, by another Irish playwright, Thomas Kilroy, is a much-needed must-see.

As Kilroy says, “This is a play about a heterosexual woman married to a bisexual man. Everything else in the play is secondary to this human predicament.”

It’s also yet another breakthrough by Guthrie Artistic Director Joe Dowling. He has been a serious presenter of both Irish plays and queer-themed plays. This is the first that combines both.

Oscar’s shared love for Lord Alfred “Bosie” Douglas triggered the wrath of the latter’s father, the obnoxious and brutally ubermacho John Sholto Douglas, Ninth Marquess of Queensberry. When the elder Douglas left his calling card for Wilde at his private men’s club—with a homophobic slur written on it—the recipient understandably was outraged. So, he filed a libel suit.

Unfortunately, the ensuing trials were awash in sexual hysteria and a circus-like atmosphere that would have been the envy of Rupert Murdoch. It was a time when no distinction existed in the public mind between consenting adult homosexual contact and pedophilia. Rational discussion about sex of any kind was all but nonexistent.

Both Oscar and Constance’s good names were ruined. Hence, she would seem to have had good reason to despise her husband.

However, Director Marcela Lorca states in reference to Kilroy’s text, “There’s complexity to all the characters and all the relationships. Constance and Oscar fall in love, and Oscar’s love for Constance never dies. He loves her throughout her life, throughout their life, and throughout all the struggles. When they were separated, and he was out of prison, there were some very angry letters. She was very upset by all that she had to endure. But then, there’s a letter that says, ‘I think if I saw him again I would forgive him everything.’ So, there’s a loyalty of the heart between those two individuals throughout their history. And I think that Oscar much appreciated her support of him, and certainly her financial support through the years. She was incredibly loyal to him.”

Kilroy explains, “Constance became for me a way into the Wilde story behind the public glitter. She also allowed me to imagine what Wilde’s sexuality might have been like behind the camp stereotype. In order to reach towards Constance, I had to turn to Wilde’s homosexual lover. Constance’s life after marriage was never completely her own. It had become part of a triangle of two men and one woman—Oscar, Bosie, and herself—a triangle that was itself peculiarly Wildean in its sexual conflict.”

Naturally, Constance resented Bosie’s arrogance and extravagance, which ate up much of the family budget even before the trials.

Lorca observes that in the play, Constance “won’t go with this triangular relationship. She does not accept that. Constance fights Bosie quite a bit, and holds him responsible for Oscar’s downfall, which, partly, he was. He was the one who instigated him to go to trial.”

When asked about the symbolism of “the fall,” Kilroy shares, “I was actually trying to echo the Victorian theme of the ‘fallen woman,’ which is also in Wilde’s work. But the fall also stands for Constance’s inner trauma with her own father. She can only face that trauma when she comes to identify herself with Oscar’s disgrace.”

Kilroy’s play daringly speculates on the abuse one might imagine the three central characters could have endured.

As Kilroy points out, “All three fathers were known for their sexuality. Constance’s father was tried for exhibitionism. Wilde’s father was notoriously promiscuous. Bosie’s father was a homophobic monster. It was a short step from this to my belief that all three were traumatized by their fathers. When I imagined this, I was able to write the play.”

Lorca remarks, “It’s fiction, but based on good research. Constance takes a big journey in the play to discover what her deep, dark secret is in relationship to her father—sort of like when people have an instinct for something that happened, but it’s not quite clear. And slowly, it starts to surface. Different events trigger memories. The events in Oscar’s life, in a way, invite her to confront her own life.”

“But throughout that, he never stopped loving Constance. And although they became distant, there was still a very strong link between them. And the children were his love. His need to see the children was very strong. So, the links in their relationship were really never severed completely. I think that spiritually, they were always connected.