Maybe you’ve heard of Two-Spirits, and if you have, you might think you know them. They are indigenous people who have been blessed with not one, but two souls: one female and one male. That extra self lends them ancient insight, according to traditional belief. This cosmic wisdom, naturally, leads them to the roles of shamans and soothsayers who whisper to the wind and learn the Earth’s secrets. That’s the popular image. 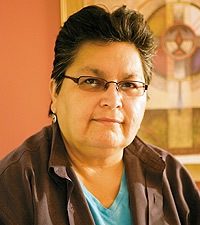 Sharon Day, Executive Director of the Twin Cities Indigenous Peoples Task Force, says nearly everything about that image, or the naming of that image, is pure boo.

“I’m not overly fond of the term ‘Two Spirit,’” Day opines. “There’s a connotation of male-female gender, but I always have felt that, as far as my own spiritual self goes”—her voice drops down to a windless whisper—“I’ve always only had one spirit. That’s who I am.”

In Day’s own case, the terms “Two-Spirit” and “lesbian” are perfect synonyms—in her words, “I’ve always identified as a lesbian”—but both terms apply.

Whatever the label put on it, Day believes her gender identity is of some use while overseeing the doings of her organization.

In order to unravel the mystery of Two-Spirits, the very language has to be addressed.

“We all have words in our own language for who we are,” Day points out. “I myself am Ojibwe. Most people refer to us as ‘American Indians,’ but we don’t look anything like actual Indians. I think we all know where that story came from.”

Even as an entire race was misnamed, the Two-Spirits within that race were even further besmirched. For generations, they were called “berdaches,” which translates, depending on the root language, to “kept boy,” “male prostitute,” or “catamite.”

Day, who describes the discovery of her own gender identity as an “awakening,” recalls, “I asked my brother, ‘How do you say “lesbian” in Ojibwe?’ He said, ‘I’ll call you back.’ He called me, and he told me, then he asked, ‘Why do you want to know?’”

Day laughs at the memory: “Oh, you know,” she had said, “I have this friend.”

So, what about the notion of Two-Spirits as shamans and soothsayers?

“I think it falls into that ‘noble savage’ image,” Day explains. “That’s not to say that we don’t do that, that there aren’t those individuals in our community, but we’re not all medicine people.”

The reality of Two-Spirits is a little more prosaic.

“We’re like everybody,” Day insists. “In our community, we’re everywhere and everything—and some, in fact, maybe more focused on a spiritual path or spiritual health. But not every person you meet is going to be a medicine person. They may, on the other hand, be an artist; they may be a nurse; they may be a carpenter. We’re just like everybody else.”

Day, in her role as Executive Director, looks forward to this summer’s Pride celebrations, where she further can battle the forces of stereotype, both inside and outside the GLBT community.

“There’s a lot to celebrate about,” Day remarks. “I’m really looking forward to Gay Pride. There have been a lot of positive changes. We still have a lot of work to do, but Gay Pride is always a good time to celebrate.”