The Life of Reilly – One Glorious Gay Success Story!

The Life of Reilly is not only one of the most marvelous success stories of a gay man set to film, but also belongs in the Hall of Fame of “Great Films About The Theater,” alongside All About Eve, The Dresser, and All That Jazz. Measuring right up there, The Life of Reilly is a bloomin’ masterpiece. 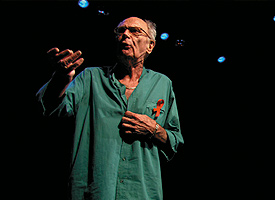 Charles Nelson Reilly (1931-2007) was known for his campy double entendres on The Hollywood Squares. Kids in the ’60s and ’70s were glued to the tube, giggling, as they watched his neurotic turn as Claymore Gregg in The Ghost and Mrs. Muir and as Hoodoo the magician in Lidsville.

But they probably didn’t appreciate that this man was a Tony Award-winning Broadway star who was told bluntly by NBC Chief Vincent J. Donahue, “They don’t let queers on television.”

The Life of Reilly, directed by Frank Anderson and Barry Poltermann, washes us in an irrepressible spirit that could weather such odds when Hollywood militantly shut out any actor who presented as “sissy.”

In 2004, when Reilly delivered the last two performances of his one-man show Save it For The Stage: The Life of Reilly, directed by Paul Linke, with whom he also cowrote the piece, Anderson and Poltermann were there. Hence, this film, shot at the El Portal Theater in North Hollywood.

Dressed casually with a red ribbon commemorating friends, colleagues, and students he taught at HB Studio who died of AIDS, Reilly is a cyclone recounting comedically such events as his racist mother wielding a baseball bat at will, and teaching to a class list that included Steve McQueen, Jack Lemmon, and Peggy Cass. Stories of Reilly’s father’s fate, his aunt’s lobotomy, and a catastrophic circus fire bring epic sweep to this intimate marvel.

Yet, for all the hardship and show biz homophobia, Reilly doesn’t wallow in self-pity.

Poltermann says, “The funny thing is, I don’t think Charles thought of his being a gay man on television as extraordinary. He was always who he was, without fear or shame. That may seem like a small thing today, but I think that in the ’60s and ’70s, that was brave and kind of revolutionary. He felt, early in his career, that the obstacles he faced were unjust, but as he says in the film, it didn’t bother him. He knew that [the situation] was wrong and fleeting, and that he would overcome these obstacles.”

According to Linke, Reilly’s simply being himself had a magnetic effect on people: “Wherever we went, he was so beloved! He made all these people who were fans feel better about themselves. That was one of his gifts.”

And Reilly’s final gift is this film. But it’s not just a filmed version of a play. It’s also a cinematic gem with a splendid feel for Reilly’s time in the 20th Century. No wonder, given that Poltermann edited Sundance-winners American Movie and The Pool.

Poltermann shares, “We wanted to provide glimpses of images. Fleeting, distorted bits of memory. The clips are so brief and scattered. We really didn’t want to take you away from the stage. So, our thought was, these are images from Charles Nelson Reilly’s memories.”

Anthony Balderrama’s docu-style camera work slices right into Reilly’s madcap humor and tragicomic sense of pathos. It’s as if the viewer joyfully is joined at the hip with this extraordinary gay artist. Indeed, here’s a theater film for the ages!