Since prehistoric times, beer has been cherished right up there with bread as the twin staffs of life. In fact, the oldest historic document known to man, a Babylonian clay tablet from 6000 B.C., documents brewing instructions. 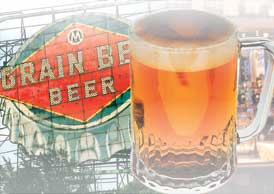 First things first. By 4000 B.C., those Babylonians had mastered 16 different types of beer, using barley, wheat and honey. By 3000 B.C., bittering agents were added to increase flavor and shelf life. Fast-forward to America, where George Washington himself maintained a small brewery at Mount Vernon.
But in the years that followed, beer imbibers became the Rodney Dangerfields of the drinking world—big gut under their blue collars, red nose above. But that’s so yesterday. Beer is the new wine, standing in for Bordeaux at fine dinners, drawing cult followings for micro-brands. Fact is, beer lovers and wine aficionados have a lot in common—and you’re not going to drink Bordeaux with your kung pao chicken, anyway.

To get a handle on which beer to drink with what—including that kung pao chicken—let’s look at how they’re made and the resulting differences in style.

Here’s How it Works

Making beer simply involves converting sugar to alcohol with the help of yeast. The prime ingredient from time immemorial has been barley—simply because it was left over, the grain least suitable for making bread.

Fortunately, it’s ideal for brewing beer. Barley gives beer its flavor, its color, its body, and its head; though other grains, like corn and rice, can also do the trick. Brewers’ yeast helps produce alcohol and carbonation.

The grains first are steeped in water to start germination, then kiln-dried (and now called “malt”). When hot water is added, the grains’ starch turns to fermentable sugars. This “mash” is filtered out and the liquid sent to the brew kettle, where hops are added as they boil together. Next, the liquid ferments, thanks to the yeast. Presto, alcohol!

Lagers are what frat boys drink—think Bud, Coors and Miller. They’re less alcoholic (3-4 percent) and their flavors more malty than hoppy. Lagers are pale gold, light-bodied, fairly carbonated, and deliver a lighter taste that’s soft, mellow and dry. They’re at their best served cold. (Pilsner is another name for lager.)

“Lagers,” says Horace Cunningham, Summit’s brewmaster, “are thirst-quenchers; they don’t challenge the taste buds as much. They’re a good start for those beginning to discover the range of beer products.

“Ales are more flavorful,” he says, “more robust. They offer more variety, so there’s more opportunity for pairings with food. They provide a lot of versatility, so,” he urges, “experiment!”

You’ve probably been to wine tastings, where you’ve compared one grape or vintage with another. Well, get ready to have the same good time with beer. Comparing samples of one style or maker with another allows you to discover your personal preferences (and those can change, according to your mood, or food. The good news is, there are no wrong answers. It’s all a matter of choice.)

There are a few qualities to consider when making your evaluation. Conningham, who does this for a living, offers four criteria:

3. Gustatory. How does it taste?

4. Trigeminals. That’s just a fancy term for how it feels in your mouth—smooth? Heavy? Effervescent?—and how it finishes on your palate—short or long?

The best compliment one can give a beer is to say it’s balanced, with all those elements in harmony. Malt is at the heart of beer’s flavor and will influence your preference. Bitter hops, like sweetness, should be present at first sip, but gradually disappear as the beer is swallowed.

Just like Goldilock’s porridge, beer should have the “right” body, too—not watery, but not over-heavy and cloying, either. When it comes to carbonation, small bubbles, as in Champagne, are best. If a beer is overly-carbonated, the gassiness can mask any subtleties of flavor. Yet if there’s too little, the beer may strike you as dull and weak. Same with alcohol: too little, and the beer tastes thin; too much makes it “winey” (which can be either good or bad, depending on your taste).

For starters, Ted Marti, owner and president of August Schell Brewing Company, suggests his Firebrick as “a stepping stone to the heavier craft beers. It’s an easy-drinking, midway beer, not overly heavy, not bitter.”

Back to that marriage made in dining heaven, beer with kung pao chicken. Why is it such a good fit? Because a light beer can help cut a peppery, spicy flavor. And because, in turn, a hoppier beer can accent it; when it comes to pairing, “Think of flavor and what you want to achieve,” counsels Cunningham. “Richer foods pair well with hoppy flavors and aromas.”

To experience the fun of a food-and-beer pairing dinner, begin with a light beer and progress to heavy, just as you’d do with wine. “Start with a gentle lager—something refreshing and not too intense,” suggests Cunningham, for when guests are nibbling at hors d’oeuvres.

Continue pouring lager with a soup course. Salads lend themselves to a couple of options: a light Hefeweizen with a vegetable salad or something heavier, like a porter or stout, if the greens are tossed with a pungent cheese. Schell’s Marti suggests Hefeweizen with a vinegar-dressed salad.

“For fish, you don’t want a beer that’s hoppy,” Cunningham advises. “But if you’re serving meat, try something a bit heavier, like an India pale ale,” which also makes a splendid marinade. For game or aged beef, he suggests progressing to a stout or seasonal brew. “They’re a little sweeter and carry the flavors of the food.”

Think beer with dessert, too. In Texas one warm day, I was handed a “root beer float” made with chocolate stout. Oatmeal stout and porter are heaven-sent for chocolate, too.

Beer also can add flavor interest to your recipes. Heat will cook off the alcohol, allowing the flavor to shine through. To add depth and nuance to a stew, a medium-to-heavy beer works best, Cunningham maintains. He marinates chicken in Oktoberfest beer and uses a winter ale to marinate ham. Soups, he finds, do better by incorporating a light, lager-style like Hefeweizen. For baking, he also suggests a lighter brew, or one not overly hopped, such as stout or porter—“good for breads,” he says, adding that the beer’s effervescence help the dough’s yeast to work. Schell’s Marti likes a pale ale—“something heavier”—for gravies.

It’s not necessary to serve the same beer as the one used in your recipe, Cunningham notes. “Do you want to complement or contrast the flavors? Experiment!” the brewmaster urges. And he points to another advantage of making beer your new wine: “It’s lighter, cleaner on the palate. It pairs better with a lot of food. Plus, because a pint of beer contains a whole lot less alcohol than a paint of wine, you’re more likely to drink in moderation.”