The Flame Debuts in Superior, Wisconsin

Warming the North-land, The Flame—the third GLBT bar in Superior, Wisconsin—opened January 7 on Tower Avenue, the city’s “Main Street,” just south of the library. Alvin Berg and Vince Nelson, co-owners of the new establishment, are life partners of 22 years. Both are well-known in the local community. 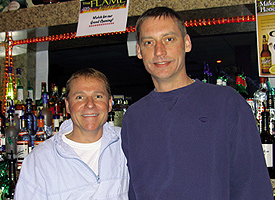 Berg says, “People have aptly described The Flame as very classy and upscale.”

Indeed, the space that once housed Louie’s restaurant has been completely transformed into an inviting new establishment. Certainly, the highlight is a beautiful glass-enclosed waterfall in the center of the room. An elevated dance floor and DJ music will keep patrons tired on their feet. Ample seating is available at the bar and numerous tables.

The Flame is looking to attract a diverse clientele, although it’s marketing primarily to the GLBT community. The new bar even is looking beyond Duluth-Superior to encourage folks from the Twin Cities to make the quick two-hour drive to the Twin Ports for a fun getaway.

The Flame’s older siblings, both a short distance away, are The Main Club, 1217 Tower Avenue, celebrating its 25th anniversary in February, and J.T.’s Bar & Grill, 1506 North Third Street, marking its 12th anniversary in April.