The Donut vs. The Bagel

With the surge of coffee, or perhaps better phrased, explosion of the coffee scene, the popularity of its side, the donut, has also surged. While only a few people still try to order “just a coffee,” people have expanded beyond the donut and started buying bagels. But which one goes best with coffee? 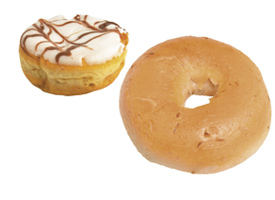 The donut has been around for generations. It’s the staple, a tradition. Coffee and donuts. It’s just the way things are. Donuts are just American. Founded in 1847 by Elizibeth Gregory, the donut has had a fulfilling history, if not fruitful. Depending on which story you listen to, the “hole” in the donut came from Elizibeth trying to be frugal and save food during a period of shortage. Others claim her son needed both his hands to steer the ship and stuck the donut on the wheel, thus creating a hole in the middle (or bagel ripoff? Read below.). In 1934, the donut was billed as “the hit food of the Century of Progress” at the World’s Fair in Chicago. Beat that bagel!

Perhaps the donut should be called a fad, the bagel has over 2 centuries on it. Depending on what you read, the bagel gets its first written mention in Poland in 1610. Seems neither tasty pastry has a definitive history. Bagels were traditionally considered food of

Jews, though it was listed bagels should be given to all pregnant woman. Brought over to American with the Jewish immigrants, the bagel didn’t gain popularity until 1872 with the invention of what else, but cream cheese. The rest is history.

Though the bagel seems to be gaining ground in recent years, don’t count out the donut just yet. But really, does it matter? Eat what tastes best with your coffee.