The Culture Has Changed

From the start, Staff Sgt. Lina Knox had an eye for public service. A native of North Minneapolis, Knox built up an impressive resumé in high school, being a two-sport athlete and class president for four straight years. But the excellent list of accomplishments didn’t stop there.

“I completed my Bachelor’s degree at Metropolitan State University, where I doubled majored in Law Enforcement and Criminal Justice,” said Knox. “I received my first Master’s degree from Saint Mary’s University-Twin Cities, in Public Safety Administration. Two years later, I went back to school and received my second Master’s degree in Clinical Social Work from the University of Saint Thomas/Saint Catherine’s University.”

In 2006, Knox was inspired by advertisements for the Minnesota National Guard that encouraged viewers to serve their country. Knox believed that if she wanted to eventually have a career in law enforcement, joining the Guard would be a good way to see if she had the necessary mental toughness to do it.

Today, Knox is a staff sergeant serving as a squad leader with the 34th ECAB, 834th ASB, Alpha Company. Knox is responsible for assisting in the fueling of aircraft. Knox has also performed three tours of duty overseas: two in Iraq, and one in Kuwait.

When she joined the military, Knox did have at least one obstacle to contend with: the then-extant “Don’t Ask, Don’t Tell” policy. Knox related to how she had to live in the closet for many years during her youth. Knox said that her coming out was more complicated than anything.

“I knew in the seventh grade something was different about me,” she said. “It had taken me a while to figure out my feelings I had for both men and women. I had a boyfriend in middle school, but my feelings for him [were] different than what I had for my one teammate I played basketball and softball with.” 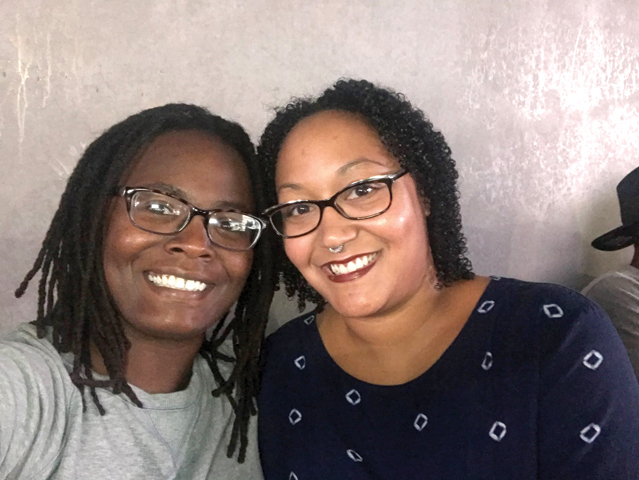 Knox grew up in a religious family, and was raised to believe that scripture was sacrosanct. One day, Knox reached out to her high school basketball coach and told her everything.

“From how I came to the realization of me having feeling for someone on the team and not knowing what to do with it,” said Knox. “Coach Jackie ensured me those feelings were natural and there is nothing to be ashamed of, but one day when I have the courage to tell my family it may be a different response, and I would have to be prepared for that.”

Knox related that it was difficult to live in two different realities: a Christian life, and a life where she could live openly as her true self. It came to the point where both worlds clashed and she had to face the truth.

“I was kind of seeing this girl on the track team and I would take her home sometimes,” said Knox. “When I didn’t take her home, I would hang out with her at her place because her mom was very understanding. One day, the girl didn’t return home after track practice and her mother thought she was with me but she wasn’t.”

“Her mother called my house and spoke to my mom; she told my mom everything,” Knox continued. “When I returned home from practice, my mom asked me about this girl. At first I lied about it, but ultimately I had to speak my truth. My mom gave the typical denial response: ‘It’s just a phase’, ‘You don’t know what you want’, and ‘You need more prayer.’ Months following my mom put holy oil on everything of mine, even the four walls of my bedroom.”

Knox realized that her basketball coach was right in what she said before.

“My relationship with my mom changed, but my dad didn’t care as much as my mom,” she said. “My life was just complicated with living a double life and trying to find who I was.”

Upon joining the National Guard, “Don’t Ask, Don’t Tell” was still in effect, and Knox said that her recruiter encouraged her to not reveal her sexuality for fear of not being accepted, or being kicked out. However, after the fall of DADT, Knox has been able to be open about who she is, and she says that the National Guard has been nothing but supportive.

“There are a lot of people who identify as LGBTQ in the Minnesota National Guard,” said Knox. “[In my] first military unit, there were about 20 openly gay or lesbian soldiers. We all supported each other because we were all ‘family.’ Now, it’s not a thing where you need to hide who you are.”

Today, Knox is happily married to her wife Denise, who is an Army veteran.

“My wife grew up as a military brat, she served almost ten years mostly active duty and [has] been on multiple deployments,” said Knox. “Denise knows the military culture and lifestyle. The only thing we are learning as a family is instead of her being away on deployment, she is now the military spouse at home. My wife knows more about the military life than I do, but it doesn’t mean it isn’t hard for us too.”

“This program gives each diverse group an opportunity to show how progressive the Guard has gotten with accepting all people into the military,” she said. “I would tell future soldiers to come join, ‘family’ is here. Many military units have some LGBTQ [soldiers] who are open, and you wouldn’t be alone. The military culture has changed.”