Bliss. Some people seek it through meditation, others through chemicals or sex. Christopher Bergland finds bliss through sweat. And he sweats a lot. Bergland has won three Ironman competitions. Each includes a 7.2-mile swim, 336-mile bike run, and 78.6-mile run. That’s equivalent to swimming the Hudson River from Ground Zero all the way north to Grant’s Tomb; hopping on a bike, and pedaling down to the old Confederate capital of Richmond; and then running all the way out to the University of Virginia at Charlottesville, two hours by car. 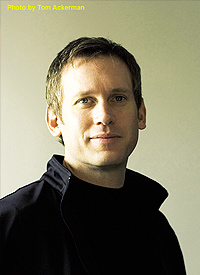 Plus, Bergland has completed three Badwater Ultramarathons. Covering 135 miles and three mountain ranges from the depths of California’s Death Valley to the heights of Mt. Whitney, in temperatures—we’re talking July—of up to 130 degrees, the Badwater is the most demanding and extreme running race on the planet.

Just reading his accomplishments makes you want a massage. But there’s more: Bergland holds the Guinness World Record for most distance covered on a 24-hour treadmill: 153.76 miles. That’s equal to running six marathons in a day.

Bergland did it as a fund-raiser for a youth AIDS organization, but the effort almost killed him. Soon after, he spent four days in a hospital. His muscles were breaking down; he suffered kidney failure; and his heart was eating away at itself.

Nearing 40 years old, Bergland made a deal with himself. He never again would push his body that hard. But he wanted to share his experiences—to show others how to use exercise, strength training, stretching, nutrition, sleep, behavioral modeling, and neurobiology to attain the blissful state he had luxuriated in for so long. Thankfully, we mortals don’t have to run up mountains or bike like Lance Armstrong to do it.

A man of extremes, Bergland sequestered himself in a Provincetown cottage to write his book.

“The first four months were romantic,” Bergland says. “I wrote 4,000 pages, and had three feet of manuscript. Then, everyone left for the winter. I had been so consumed with what I was doing, but finally I realized I had to be plugged in to people. I was so isolated, as an athlete and a person.”

So, Bergland changed direction. Revising The Athlete’s Way: Sweat and the Biology of Bliss, he added an emphasis on the importance of connecting with people in everything we do.

Bergland realized that “people who exercise all the time disconnect from the world. My goal is to be in the trenches with humanity. The whole idea behind this book is to help people find bliss as both individuals and part of a collective society. There’s a strong spiritual component to it, but it’s very practical. It’s a way to gain the optimism, resilience, and intensity of an athlete, while making exercise a sense of joy. Sweat becomes a symbol of striving for excellence. It can be applied to any dream or goal you aspire to achieve.”

Bergland—who battled depression as a teenager, drank heavily for two years at boarding school, and felt asexual all through college—owes a lot to exercise.

“It gave me confidence and strength,” Bergland explains. “It can do the same for anyone. All animals seek pleasure, and avoid pain. If you make fitness pleasurable, you’ll seek it more.”

Bergland is particularly adamant about what physical activity can do for gay men: “We are very resilient. We go through so much in our lives. It takes a lot to come through it all optimistic and determined. But if we exercise daily, we’ll have great stamina, tenacity, stress reduction, sense of purpose, kinship, and drive.”

“That’s part of the problem with marketing this,” Bergland shares. “I tried to make the message universal, but people who are struggling with sexuality issues will definitely understand what I’m trying to say.”

Bergland, who relates that he was pressured not to come out in the book, recalls, “I was going to degay it—to write in a ‘Don’t Ask, Don’t Tell’ kind of way. I was being really cautious about pronoun use. Then, I just said, ‘Screw it.’ I ended up with quotes I’m really proud of. I’d call it ‘postgay.’”

Meanwhile, Bergland has more things on his mind than helping sedentary people find bliss through exercise and positive attitudes. He recently had a daughter, with a female friend who is also an Ironman athlete.

“Mirabel is beautiful and thriving,” Bergland enthuses about his daughter. “Fatherhood is the most amazing thing. I can’t even begin to describe it. It’s just incredible.”

Bergland has discovered one more path to bliss.