Park Square Theatre swoons to the rhythm of Lady Day at Emerson’s Bar and Grill, by Lanie Robertson. Set in Philadelphia, this solo piece about “Lady Day”—Billie Holiday (1915-1959), the iconic jazz singer addicted to heroin who was abused by men, racism, and show biz—has garnered raves wherever it has played. You may remember Robertson as the one who penned Woman Before a Glass, produced by Minnesota Jewish Theatre last year, for which Sally Wingert won an Ivey Award. 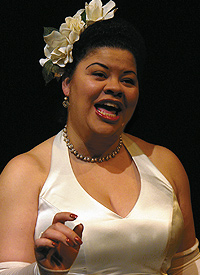 Odds are that the superb Thomasina Petrus, who portrays Lady Day, could be an Ivey contender herself, given the role’s vocal and dramatic range.Though the play doesn’t address Holiday’s bisexuality directly, Petrus—like the true actor-researcher she is—nonetheless, has looked into conversations both on and off the record about the subject. You could call this “inner work” in developing a character within the prerehearsal and rehearsal process. Hence, unspoken elements well may breathe through the textures when the actor ultimately opens the play.Petrus suspects one of the problems of deciphering Holiday’s love life is that drugs likely distorted conversations she had with William Dufty, who steered (and perhaps opportunized) the writing of her autobiography, Lady Sings the Blues. Lavender readers may know the sanitized 1971 film version with the wonderful but miscast Diana Ross.

However, conversations with other figures in her life from other sources show a more erotically ambiguous Holiday. Petrus points out that Holiday’s Harlem was a place where black and white entertainers let their guard down, and gathered together for a good ’ol party time. She knew all the hideaway clubs, not to mention private parties and orgies. No wonder so many people were drawn to her. It’s held widely that Tallulah Bankhead was one of Holiday’s lovers. But what happened in Harlem stayed in Harlem. Most whites who “slummed it” there didn’t own up afterward. Bankhead referred to Holiday merely as a casual show biz acquaintance.

Ultimately, the bane of Holiday’s existence was a lethal combo of racism and heroin. She made big profits for club managers, liquor sellers, and restaurateurs, but was restricted as to where she could eat and even use the toilet because of her skin color.Petrus says, “She was treated like a dog.”Holiday’s vocal style was one that seemed to flow naturally behind the tempo, as Petrus observes: “She kind of, like, just floated on top of the music. She was telling you a real story every time she sang. You felt whatever she was singing about.”Indeed, the play itself, Lady Day at Emerson’s Bar and Grill, has been compared in shape and structure on a larger scale to a Billie Holiday song.The show’s tunes include “God Bless the Child,” with its undercurrent about Holiday’s own troubled relationship with her mother. “Strange Fruit” refers to the notorious Southern legacy of lynching. And “T’ain’t Nobody’s Bizness If I Do” could be code for her love affairs.Director Austene Van notes, “It’s important that we don’t forget our history. You have to look back to know where you’re going. The struggles Billie Holiday had to go through are still relevant.” Van adds that this production “is not Hollywood. It’s the real deal.”