Strike Up the Oscar!

How does one produce a theme-party based on an awards show that might not happen because of the union strike? Well, you create your own reality—welcome to my world. Since I was 12, I have celebrated the Academy Awards, one way or another. 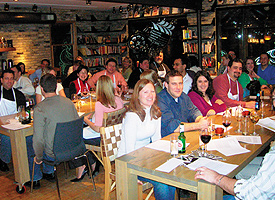 As a young boy, I couldn’t wait to watch Good Morning America the morning of the Oscar telecast, because it featured foods served at Spago Beverly Hills created by Chef Wolfgang Puck. During the late 1980s and early 1990s, this establishment was the celebrity hot spot where Oscar winners partied until the wee hours of the morning.

Eventually, the Academy of Motion Picture Arts and Sciences invited Puck to head up the poorly attended Governor’s Ball that immediately follows the Oscar ceremony. He reinvented the event, which became the hottest ticket in Hollywood, featuring showstoppers like Miniature Chocolate Oscars Embossed in Gold Leaf, Smoked Salmon with Caviar Pizza, and Pan Roasted Organic Chicken with Black Truffle Risotto.

So, as a young boy, I wanted to copy what Puck was creating. It was exciting and innovative.

Currently, my annual Oscar party includes a modest 15 party-goers at most. My partner, Chad, and I move our dining room furniture against the wall to create a buffet-style setting. Planning the menu takes months, and creation of the finished menu occupies several days.

Once the evening begins, trays are passed with hors d’oeuvres such as Blue Cheese Stuffed Mini Burgers, Venetian Shrimp Cocktail Shooters, and Whiskey-Soaked Cold Smoked Salmon. Our dining room table is filled with inspirational arrangements that adorn the Antipasto assortment of Hawaiian Cole Slaw Topped with Salmon (served in martini glasses), Salmon and Caviar Spread, Crispy Thin Homemade Crackers—and, of course, my famous Fresh Pesto Pizzas. Varieties of foods are planned to come out at different times of the evening.

Our Oscar party begins around 6 PM, with the majority of attendees not leaving until the very end of the Academy Awards telecast. Champagne and wine flow throughout the evening. Desserts, offered after 9:30 PM, encompass such works of art as my Personal Baked Alaska and Champagne Raspberry Parfait (Champagne Jell-0 with layers of fresh raspberries).

Food always has been the centerpiece of my Oscar parties

My first “bash” took place in my family’s living room, with my Mom and I watching the year that Liza Minnelli won Best Actress for Cabaret (1972). We drank Coca-Cola and ate Old Dutch Potato Chips. I loved the way my Mom would name the actor or actress she thought would win because of events in that celebrity’s life. “Liza will get it, because her Mom was Judy Garland,” my Mom would say with authority, and she was right, but for the wrong reasons. 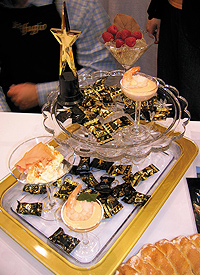 The following year, I had Mom stop at Miller’s grocery store after picking me up from school. We purchased crab salad, crackers, and nonalcoholic champagne (grape juice)—and thus a tradition began. Also that year, I handed out 75 Oscar ballots to the kids in my junior high school classes. My classmates picked The Exorcist to win Best Picture, even though none of us were old enough to go see it.

Since the Writers Guild of America strike began on November 5, movies, television, and award shows have been affected greatly. The Golden Globes, the feistiest movie awards event of them all, was reduced to a news conference, while the future of this year’s Oscars has been in question.

At this writing, the strike continues, so, in the proactive spirit of “the show must go on,” I offer these no-show tips:

• Invite your guests as usual. Roll out a red carpet (or red cloth, depending on your budget), and have a friend photograph your arriving guests (with the flash on). Serve your favorite foods, and let the beverages flow until the end of the evening.

• In the event that the Oscar telecast is merely a news conference, designate a celebrity name and persona for each guest. Have someone in another room watch and write down the winners. Then, have a “guest celebrity” read the nominees, and announce the winner in the party area.

• Have some real fun: Assign guests to accept the Oscar (snow globes, a hair brush, or a bowling trophy work as substitutes), and give a speech.

Striking the Oscars actually could turn parties into a lot of fun this year—champagne glass half-full or half empty?

Champagne is mother’s milk to me. I have adored this drink since it was legal for me to consume it—well, actually, before then, as well.

Serve in a variety of glasses to create a mood and add to the conversation. I’ve offered this adult dessert to my guests in pilsner glasses, martini glasses, highball glasses, and parfait glasses. I’m sure there are other wonderful ways to serve it, but that’s for you to decide.

Try blackberries, baby strawberries, cherries, and blueberries. I even have used golden berries and currants.

In a heavy-bottomed saucepan, combine water and gelatin. Let soften for 5 minutes. Turn heat to low, and stir gently until the gelatin dissolves. Do not let boil. Add sugar, and blend. Remove from heat. Continue stirring mixture until sugar has dissolved completely. Pour in Champagne, and blend well. Pour champagne mixture into a baking pan, and cover. Refrigerate overnight, or until set—which can take up to 12 hours. Set parfait, pilsner, or large martini glasses on a serving tray. Toss raspberries with 2 tablespoons of sugar. Spoon Champagne gelatin chunks into glasses. Layer gelatin and raspberries until all ingredients are used. Finish with top layer of raspberries. Chill until ready to serve. Serves eight.

A Night with the Stars
Sunday, February 24 6-11pm
Hosted by: Chef, TV Persoanlity, Local Celebrity John Michael Lerma & The Killer Bee’s.
Featuring John Michael’s Hollywood Sangria as seen on Kare 11.
Show off on the Red Carpet and Dress to Impress, or come as you are. Prize drawing for the Best Oscar Attire!