Sports play an enor-mous role in Twin Cities culture. GLBT spectators can choose from a virtual rainbow of athletic options: the Minnesota Vikings, Wild, Thunder, Twins, Timberwolves, and Lynx compete against each other for the entertainment dollars of sports fans, but many members of our rainbow team would rather play than watch. And the Twin Cities have options a-plenty for them, as well. 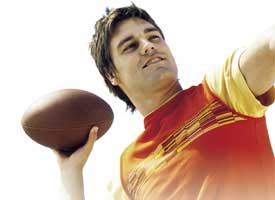 The aptly-named Minnesota Mayhem is a local rugby club composed mostly of gay men. Interestingly and importantly, the league in which they compete is not gay-specific, but their collective gender identity is obvious when you consider that their team colors, black and blue, accessorize quite neatly with their injuries. The Mayhem is always looking for talent, and, if you make the initial cut, you might just last long enough to learn rugby’s elaborate rules.

A considerably lower-impact outlet for athletic talent is bowling (at least where the pins aren’t concerned). When the local GLBT community craves strikes and spares, it can find satisfaction thanks to the Alliance of Minnesota Gay and Lesbian Bowlers.

Perhaps the highest-impact sports option is supplied by the North Star Gay and Lesbian Gun Club. The club promotes a vigorous, drug-free exploration of the U.S. Constitution’s Second Amendment, focusing on firearms as a means to sporting, hunting, and self-defense. The Club emphasizes its non-political nature as its members enjoy the bonding that only small, controlled explosions can provide.

Athletes who eschew competition altogether can come out to play in the Twin Cities. The International Front Runners is a worldwide organization whose interest revolves around two-legged kinetics. Minneapolis and St. Paul share a club whose members divide their redoubtable attention between walking and running.

Another venue which is much more about teamwork and fun than competition is Outwoods. Outwoods is a non-profit recreation club that enables its members to enjoy stylized outdoor activities. Volunteerism is an enormous emphasis: not only do volunteers perform the obvious administrative duties, but volunteers also assume leadership during events that they themselves design and propose. Outwoods is active all year long, with repeat get-togethers revolving around water skiing, summer camping, and rollerblading in the warm months, along with snow skiing, winter camping, and ice skating after the snow flies.

An additional non-traditional sporting organization is the North Star Gay Rodeo Association. (Please spare them the Brokeback Mountain jokes—they’ve heard ‘em all.) NSGRA prides itself on being a friendly environment where members can participate in and learn about what they call “the Western lifestyle.” Members can indulge in this participation by serving as contestants, spectators, or volunteers in any one of myriad competitions.

More traditional Minnesotan sports fare is hockey—indeed, the puck wars are an institution within the Land of 10,000 (sometimes frozen) Lakes. The Twin Cities Gay Hockey Association provides its players with an environment where competition is enabled, regardless of each player’s level of ability and gender identity. The levels of ability include recreational, intermediate, and advanced. (We’ll assume you’re hep to the gender identities.) The TCGHA also works to keep costs as low as possible, as hockey is such an expensive sport.

Perhaps the greatest Minnesota summer tradition, after our long good-byes, is softball. The Twin Cities Goodtime Softball League is home to nearly 500 players who compete on over 30 teams. This competition culminates in the North Star Classic Tournament, which can, in its turn, lead to an appearance in the Gay World Series. While all gender identities are welcome at Goodtime, the Northern Lights Women’s Softball League is for girls only.