The reign in Spain stayed mainly in the hills. The sizzle of flamenco, the flash of toreadors are absent in these historic towns, and in their stead rise fortress-castles where Spain’s monarchs once resided, towering over twisting cobbled streets almost too narrow for the donkey of Cervantes. These walled cities host cathedrals of majesty amid lacy spires of lesser churches, leavened by sunny plazas where life slows down to savor the moment. Mansions of medieval courtiers are dressed in lacy Arabic patterns. Come, they beckon. Slip into the romance of days long gone in a setting from a fairy tale. 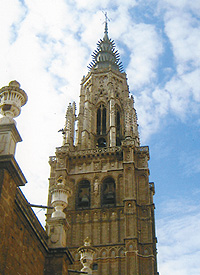 One of those enchanted towns is Toledo. These days, it’s half an hour from Madrid via high-speed AV train—a journey back to the tiny city’s zenith in the 1500s—after which, as an inscription told us, “time runned out.” A blessing in disguise—which translates to no high-rise hotels, no Starbucks, no neon, no Muzak, nor other modern annoyances—simply immersion in its time-buffed charm.

Toledo was the “it” city, until the monarch moved to Madrid in 1565. It remains just as postcard-pretty—a near-island crowning a rocky gorge etched by the Tajus River. Dawn rises, and you’re smacked in the efface by twin silhouettes of its most impressive edifices, the Cathedral and the Alcazar fortress—like pairing the Taj Mahal and the Pentagon. Lesser towers pierce the blue, blue sky. You even will spy the medieval synagogues and mosques that coexist.

This city has blended those cultures, along with a laundry list that starts with the ancient Celts and Romans, and proceeds to invading Visigoths. Each left traces. In fact, they co-opted each other’s scenes of worship as their own. Thus, the synagogues (devoid of Jews since a decree in 1492) are of Muslim design, but today serve as Christian churches. Roman gates and arches still stand tall, along with bridges, towers, and burial vaults. Live and let live—or at least, build onto it.

The Zocodover serves as the city’s living room. Park yourself on the plaza, in the formidable shadow of the Alcazar, and watch kids chasing pigeons, old folks taking the air, and everyone in between relaxing in outdoor cafés like El Faro, serving traditional tapas: partridge with peppers, honey-laced chorizo, Iberian ham, and potato tortillas (like a wedge of hashed browns). And for dessert—bring on the marzipan. It’s the culinary signature of the city.

Amble toward the Cathedral, said to be the grandest in all Spain, fed by streets named “Inferno” and “Calle del Diablo” to enforce the message of where you’d better be spending your time. This opulent wedding-cake edifice, designed by the son of El Greco, houses scores of the artist’s portraits (along with a fabulous Fra Angelico that Mussolini saw fit to donate). Close by, in the Jewish Quarter, you can visit the painter’s home, or gaze on his most famous altarpiece in Santo Tome Church. Another example blazes with his signature blue and crimson in glorious little Santo Domingo, where a frail nun pointed me to the artist’s grave (and also offered to sell me more marzipan).

Most of Toledo’s visitors hop back on the tour bus at twilight—and miss the best part: prowling the shadowy medieval alleyways, and, even better, the chance to eat dinner there. But first, a tour of the city’s “insider” wine bars by Hugo, of Wine Times, who introduces the region’s premier grapes, and vintners, before dinner.

It’s 9:30, and we’re the early birds at Adolfo, a contempo café, and my favorite in town, where we made a dash for the scrambled eggs with chorizo, star among the tapas, followed by venison stew, a regional delight.

A meal in El Palaceto, amid the lacy arches of an 11th-Century Moorish palace, favored a lamb shank so tender, it melted under my gaze. Or, cross the river to the Toledo Parador, with its drop-dead view of the city and a menu to match: cream of wild mushrooms dressed in shavings of Iberian ham; tuna robed with dried fruits; and duck confit with pink peppers and—hold on—more marzipan. Stay the night in this historic setting, or opt for the Hilton Palacio Buenavista, enfolding an historic palace. The hotel boasts its own art museum, spa, and shuttle service into town across the river. Our AC Hotel provided views aplenty (but neither shuttle nor spa), plus a restaurant saluting modern Spanish cooking via monkfish on smoked potato cream, or sea bass with almond sauce and candied orange.

Segovia, like Toledo, has been named a World Heritage City to preserve and salute the treasures clasped within its medieval walls. The severe facades of its churches and palatial mansions likewise have been softened by graceful scrolls of Arabic design. But it was the Romans, crafty in feats of engineering, that provided the city with its iconic landmark: an awe-inspiring, two-story Aqueduct composed of 116 graceful arches.

King Philip provided the other: the mighty Alcazar fortress-palace. (Looks familiar? Right. Its copy, with slender witch-hat turrets galore, serves as Sleeping Beauty’s castle in Disneyland). Pretty gardens overlook the river far below, while within, visitors marvel at its sumptuous staterooms and a mural of Isabella. Halfway between these two monuments stands San Martin, the church where Isabella was crowned queen. Today, it’s a bit player on the stage of the lively Plaza Mayor—once scene of executions, religions processions, and bullfights, and now home to the more mellow entertainment of outdoor cafés. Segovia’s Cathedral sits here, too, in all its flamboyant Gothic overkill of buttresses and pinnacles.

Alleys trailing off lead to the Jewish Quarter, source of opulence and beauty until, in 1492, its residents were forced to convert or flee. Another avenue of stop-and-gawk facades reveals the Plaza San Martin, where kids splash in its fountain, while their elders sip vino tinto at the tapas bars. But all is not an homage to the past—oh, no. Within a palace dated 1455 shines the Museum of Contemporary Arts—ta da!—while an  imposing medieval granary now houses another home for modern exhibitions.

And nothing could be more cutting-edge than the kitchen of Di Vino, whose whiz-kid chef creates “ravioli” of sweet red peppers plumped with vanilla-scented goat cheese; a seafood composition of flaky hake and briny cockle on a bed of spinach; and pork cheeks on roasted melon dusted with dried ham. Or, steer for the terrine of fois gras and caramel-flavored tuna, followed by mango-lobster salad, then a toss of wild mushrooms and truffled pork cheeks, at the Parador de Segovia, capped by a spectacular view of the city. Overlook an ultratraditional feast at Candido, in the shadow of the Aqueduct, and you’ll regret it. What to eat? The famous suckling pig. It’s carted out by the proud proprietor, who has donned a medallioned ribbon in its honor. Theatrically, he slices the baby porker with a china dish—talk about tender!—and plops the haunch, hoof and all, on my plate. Muchas gracias, as we often have had reason to repeat.

Want seconds? I’ll be back!