not much about
the Twin Cities appearance reveals its unique historical perspective. Our streets have all but turned their backs on the Mississippi and its link to our lumber-mill roots, and much of our architecture looks like it was placed here just the other day by a race of well-intentioned, if indifferent, beings. But never mind the aesthetic oversight; the Twin Cities has a long and celebrated tradition of being a cultural focal point, especially when it comes to music. 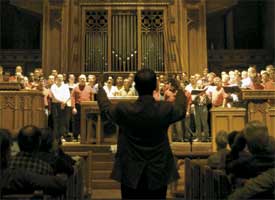 In fact, it was slighty more than 10 years after our state flag was approved in 1893 by the Legislature that the Minnesota Orchestra performed its first concert. Its excellence distinguished the ensemble very quickly: the orchestra completed its first regional tour in 1907, and made its New York City debut in 1912 at Carnegie Hall, where it continues to perform regularly. Internationally, the Minnesota Orchestra has played concerts anywhere from Latin America to the Middle East. These days, the group maintains a full schedule of about 200 concerts each and every year, with something for most age groups and tastes. For upcoming performances, concertgoers should visit <www.minnesotaorchestra.org>.

Just across the river is another national treasure: the St. Paul Chamber Orchestra is the country’s only full-time professional chamber orchestra, and is regarded as one of the finest in the world. That sterling reputation has attracted artistic partners such as pianist Pierre-Laurent Aimard, harpsichordist Nicholas McGegan, and soprano Dawn Upshaw. From the time of its inception in the 1950s, the group of 35 has released 65 recordings, commissioned more than 100 new works, and toured internationally. Visit <www.thespco.org>.

The Minnesota Opera was founded just a few years later, in 1963. Originally known for its experimental works, upon merging with the St. Paul Opera in 1975, the company began a shift in focus to more traditional works, with a special emphasis on the “Bel Canto” period. As one of three resident arts organizations performing at the Ordway Center in St. Paul, productions are lavish and sell out quickly. Visit <mnopera.org>.

As the Minnesota Opera began moving toward more traditional works, they also began a program called Nautilus in 1986 to initiate the writing and performance of new operas, facilitate workshops, and offer training to local performers. Eventually Nautilus became a fully independent organization in 1992, and performs at a variety of venues throughout the Twin Cities. Visit <www.wesleybalk.org/nautilus.html>.

Perhaps because of the strong influence of St. Olaf College’s choral tradition, the Twin Cities boasts an astonishing number of choruses: The Minnesota Chorale, VocalEssence, The Dale Warland Singers, and the Twin Cities Women’s Choir are but a few.

The Twin Cities Gay Men’s Chorus is one of the region’s powerhouses, with more than 140 members and a full concert season. Founded in 1981, it is now the fourth largest group of its kind in the nation, and has recorded 10 CDs. Visit <www.tcgmc.org>.

Like the Twin Cities Gay Men’s Chorus, other local choral groups have found their inspiration with social movements. Calliope Women’s Choir, for example, is a feminist group made up of lesbian, bisexual, and heterosexual women. One of the group’s goals, besides their dedication to music, is to provide a supportive environment for its singers and its audience—to satisfy both groups “socially and spiritually.” Visit <www.calliopewomenschorus.org>.

One Voice Mixed Chorus brings GLBT men and women together, along with their straight allies, to form the largest GLBT mixed chorus in North America. Founded in 1989, it has now grown to 80 members who perform two concerts a year, in addition to a dozen or so performances around the community. Like Twin Cities Gay Men’s Chorus and Calliope, One Voice Mixed Chorus also makes a concerted effort to provide numerous community building opportunities for its members. More information about the group is available at <>.

All the aforementioned choirs perform a variety of music, so fans can find a concert to suit their taste, whether it be showtunes or Bach. However, if you’re in the mood for something with a little more kick, singer and pianist Lori Dokken—<www.loridokken.com>—can be found most nights of the week at the Town House or The Times, either solo or with some or all of “The Girls”: vocalists Judi Donaghy and Erin Schwab, and sometimes former member Debbie Duncan. If you frequent The Times, you’re also likely to cross paths with Vic Volare or The Wolverines—either in big band or jazz trio form, with their fabulous drummer Jendeen Forberg, formerly of All The Pretty Horses.

With the wealth of musical ensembles in the area, it seems hardly fair that neither of our two metropoli can claim the title of “Live Music Capital of the World”—unfortunately, that distinction has already been bestowed on Austin, Texas. However, the Twin Cities definitely gives Austin a run for its money, and has for the past hundred years.