Tuesday, April 22Our airplane circled an hour before trying to land, flying through clouds tossing left and right. A sound like that of a bomb traveled through the cabin, followed by a bright flash of light. The airplane was thrown about so violently that a stewardess dropped to her knees in order to get to the back of the plane. I grabbed Chad’s hand—my fabulous pie career was over. Ascending above the storm, we flew to Sioux Falls, South Dakota, to refuel. There, we were told that the airplane had been hit by lightning, and needed to be inspected for damage before flying back to Minneapolis. Eventually, Chad and I walked through the front door of our house at 4:30 AM, dropped our suitcases, and crawled upstairs to bed.

But let me take you back to the beginning of this week that was, alternately, the best and worst of times. 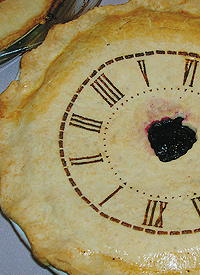 Up at 3:30 AM. Taxi came at 4:20 AM. Checked in at Northwest. Plane airborne promptly at 6:35 AM. Arrived to a beautiful day in Orlando. Picked up our rental car, and drove directly to SuperTarget for groceries. I saved $53 and change on our $334 bill by clipping coupons. Feeling smart, Chad and I returned to the house to unpack, prepare supper, and work on a filming schedule for my fourth Food Network Challenge.

Blind-baked crusts. Visited Sea World. Prepared a “yummy” supper for Chad to eat while watching Survivor. Then, baked Aloha Joe Pineapple Paradise Pie to store in refrigerator for the competition.

Began baking pies in the morning. We drove to the Resort to film my 3 PM preinterview with the Food Network. My goal was six pies that night. I removed the last pie from the oven at 2:30 AM. Went straight to bed.

I started to get really nervous that I was not going to be able to pull off this Challenge. 1 PM: “Start your ovens!” I had my own camera crew, sound guy, and field producer. I began baking my Triple Crown Cherry Pie. Some pies were baked completely, some “fake and bake” for the camera and editing team. Chef Gail Gand stopped by to say hello, and have her picture taken with me, but that was it—no time to gab with this famous chef. 4:30 PM: The filming stopped. I was covered in flour, cornstarch, berry juice, and sweat. We left to drive to Celebration, Florida, for the amateur awards. I signed autographs, and posed for photos. Awards over, it was back to the house to finish baking all my pies.

The Big Day: Part Two! Feverishly, at 5:30 AM, I whipped toppings, and piped out decorative designs on the cream and chiffon pies, finishing with garnishes of fresh mint, nuts, or dried fruits. Arrived at 7:15 AM with my 10 pies at the Orlando Sun Resort. The Food Network turned on the cameras. I turned on my brightest smile. Back at the house, I threw a ham in the oven, and took a quick shower. The Food Network arrived to set up the lighting to film amateur and professional competitors arriving for our American Pie Festival Brunch. It was a huge success—even the President of Crisco appeared. At Noon, we all left for Celebration for the professional awards ceremony. It was 86 degrees and humid, and I was wearing all black. I won two awards: one for my Triple Crown Cherry Pie, and one for my Wolf Pack Trail Mix Pie. I jumped, shouted, and ran to the stage. I completed my postinterview with the Food Network around 9:15 PM. After sitting in our heated pool celebrating with wine and laughter, I hit the bed at 2:30 AM, not looking forward to the alarm ringing in four hours.

At 6:30 AM, I began packing my kitchen utensils, pie plates, and everything I had brought from my kitchen in St. Paul. Our rental car loaded, Chad and I said good-bye to our beautiful home in Orlando, with its enclosed spa and swimming pool. We were off to reward ourselves with a day at Discovery Cove, swimming with dolphins, stingrays, and hundreds of tropical fish. Our flight didn’t leave until 8:30 PM, so we had the entire day to play.
John Michael Lerma is a local chef, author, and Food Network personality. His company Garden County Cooking offers cookbooks, cooking classes, consulting, and private events, as well as culinary vacations to Italy and the Caribbean. Visit www.GardenCounty.info. Check out his “Word of Mouth” Blog under Extras at LavenderMagazine.com.