Sure, shopping is easier than ever these days. Most products are just a double-click away, usually complete with a detailed description and a picture you can examine (and even alter at will). Still, where’s the thrill in that? Shopping isn’t about the purchase. It’s about the chase. It’s about the discovery of amazing bargains in places you weren’t expecting. And it’s about communing with the mass of others all out on the same quest. 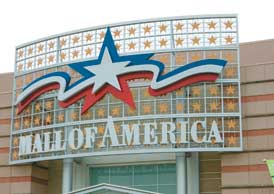 The Twin Cities offers shopping experiences galore, from one end of the spectrum to the other. The veritable throbbing heart of shopping in the Twin Cities is the Mall of America. Built where the Twins and Vikings (not to mention the soccer-playing Kicks and other lost-to-history athletic teams) played before the construction of the Metrodome, this Bloomington-area landmark transformed to the sport of shopping in the early 1990s. MOA, which refers to itself as the “nation’s largest retail and entertainment complex,” attracts 40 million visitors each year to its 4.2 million square feet of space. Inside, consumers can find just about anything to satiate their shopping needs. High-end shops, clothing boutiques packed with the latest fashions, classy department stores, and locations packed with unique gifts and items are at every turn.

And the Mall of America also offers entertainment. Most famous is the Park at MOA (formerly known as “Camp Snoopy”), an indoor amusement park that offers rides and other fun events. Later this spring, the park will complete its transformation into Nickelodeon Universe, so get ready for the SpongeBob SquarePants Rock Bottom Plunge and the extreme Avatar Airbender. It’s not just the kids who can be entertained at the Mall of America. Special concerts and other events are held throughout the year at MOA, not to mention full-time attractions, such as the Underwater Adventure Aquarium; the A.C.E.S. Flight Simulator; and, for a chance to bond with your inner speed demon, the NASCAR Silicon Motor Speedway. Visit <www.mallofamerica.com>

Of course, you don’t have to hike down to Bloomington to find shopping opportunities. Minneapolis and St. Paul are like dozens of small towns linked together, and each neighborhood has its own unique spin. Minneapolis’s Downtown and Uptown offer different opportunities. Downtown includes long-standing department stores, City Center, Crystal Court, and the Nicollet Avenue Mall (which also allows you to toss your hat in joy next to a statue of Mary Tyler Moore). And, if the weather is inclement, or you just don’t want to hang out outdoors, Downtown’s extensive skyway system can help you get from place to place without being exposed to the elements.

Uptown doesn’t have skyways, but what it may lack in that amenity, it more than makes up with character. Centered on the intersection of Lake Street and Hennepin Avenue, it offers tons of unique and unusual options, many affordable for, say, a freelance writer looking to step up from the typical thrift store clothing. There are also several independent booksellers (such as Dreamhaven, the longtime GLBT-friendly comic and bookstore); music stores (including the epic Uptown Cheapo’s, which has a basement packed not just with vintage vinyl, but cassettes!); and old-style independent movie theaters.

Not to be left out, St. Paul offers its own shopping districts, packed with unique charms. Grand Avenue stretches for 30 blocks from the Mississippi River to Downtown St. Paul. Along its course, Grand offers just about anything you may be looking for—from fine jewelry to hip fashions at Hot Mama and Trade Winds to more than three-dozen different restaurants, coffee shops, and bakeries. District del Sol on St. Paul’s West Side provides shopping opportunities of a distinct Latin flavor. Other neighborhoods throughout the city contain unique shops and truly intriguing finds for the committed shopper. This is played out within the charms of a city that embraces its historic roots—from turn-of-the-20th-Century industrial buildings to numerous stately manors.

Of course, the metro area doesn’t stop at the borders of Minneapolis and St. Paul. If you don’t want to venture out to the Mall of America, numerous shopping malls are scattered throughout the metro area. While each has its own charms, Southdale is certainly worth an extra look. Built more than a half-century ago, it was the first indoor mall in the United States. Through the years, it has gone through a number of transformations. Now, it plays host to numerous fashionable clothing shops (Abercrombie & Fitch, the Gap, and Banana Republic, just to name a few); anchor department stores (including Macy’s), and tons of unique shops.

And if you don’t mind getting a bit out of the immediate metro area, take a trip to Stillwater. On the St. Croix River, it offers a revitalized shopping district packed not just with unique shops, but artists studios and galleries. Here is a place to find the perfect and unique gift for the most difficult of friends (or just for yourself).