Mobility is at the core of the American identity, and so it is in the Land of 10,000 Lakes. Mass transit plays an ever-increasing role in this collective mobility.

The distinguished Metropolitan Council presides over 90 percent of Twin Cities buses via its Metro Transit division, the 18th-largest such system in the world. Fares vary a little, depending on the when—rush hour and nonrush hour—and the who—youths, adults, or seniors—of each ride. Multiple payment options, including transferable and high-frequency user cards, simultaneously and peacefully coexist. 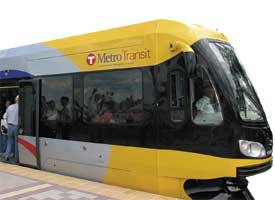 Public transit can assert itself in many forms. Minnesota’s first-and-so-far-only light rail system takes its name from Hiawatha Avenue, to which it runs more or less parallel. The Hiawatha Line started off as the pet obsession of former Governor Jesse Ventura. Through his dogged efforts, light rail went from a particularly tenacious series of electrons firing inside his brain to a metal-and-glass reality. Groundbreaking ceremonies for the LRT appropriately took place just as the new millennium began. Four years later, it began operation. Its northernmost station is nestled within Minneapolis’s famous Warehouse District, and its southernmost stop is the Mall of America, with 17 artwork-laden points in between. According to a recent study, well more than 10 percent of Twin Cities’ commuters use the light rail system in some way, shape, or form, and that number is steadily increasing.

As utilitarian as the current system is, the future looks bright, as well, as plans proceed apace for the Northstar Corridor, a commuter rail that will connect Minneapolis to St. Cloud.

Some travelers prefer to navigate themselves, but they find the often-inclement weather something of a turnoff to self-propulsion. The downtown areas of both Minneapolis and Saint Paul can and do accommodate via their elaborate skyway systems. The term “sky” in skyway may be a little optimistic as, most of this modern-day labyrinth is only two or three stories above street level. Seven miles of weather-blocking tunnel snake over 70 blocks of Downtown Minneapolis, while, within the state’s capital city, five miles of analogous skyway protect weather-wary pedestrians as they move from one end of a 30-block area to another. All the major buildings of both cities are points on this steel-and-granite web, including Minnesota’s officially tallest, the IDS Center.

Some prefer to do their hoofing in more natural settings, and the Twin Cities offers multiple options. Most often, these literal movers and shakers partake of the area’s exemplary park system, known throughout the country (among those who keep track of such things) as one of the best.

Trails aplenty lie preblazed for the walker who likes his or her urban-rustic experience to be a fairly tame one. Minneapolis alone boasts nearly 50 miles of National Scenic Byway, and beyond walkers, other beneficiaries include joggers, runners, walkers, cyclists, and inline skaters. Perhaps most popular of these are the trails, paths, and roadways encircling the City of Lake’s chain of lakes. This system is 15 miles long, connecting Minneapolis’s biggest and best-known water bodies, Cedar Lake, Lake Calhoun, Lake Harriet, and Lake of the Isles. All told, the Grand Rounds connects the Chain of Lakes, Lake Nokomis, Lake Hiawatha, and Minnehaha Falls—it’s America’s longest continuous system of public urban parkways, and, according to city sources, “has been the preeminent urban parkway system for more than a century.”

Citizens of North Minneapolis often gravitate toward the Elm Creek Park Reserve. Its paths traverse the northern suburbs, connecting Maple Grove to Brooklyn Park (more or less) naturally. Between one and the other are the Mississippi River and Coon Rapids Dam Regional Park. Meanwhile, to the west, the Luce Line State Trail spans 65 total miles. Under the auspices of the Minneapolis suburbs is a 20-mile stretch of paved path that links Plymouth to Winstead. Beyond that point, things get considerably less rock ‘n’ roll (with apologies to Donny and Marie Osmond). Winstead is connected to Hutchinson via gravel. Things get even less civilized from there, devolving from gravel to crushed granite to mere grass. The trail is renowned for providing a dazzling cross section of animal and plant life.

St. Paul walkers need not be benchwarmers. The Gateway State Trail is composed of 18 paved miles, which start (or end) just north of the State Capitol. From there, the Gateway State Trail traverses Phalen-Keller Regional Park only to end (or start) at rural Washington County, with all that that entails. In fact, the entire path has a rural feel, a stark contrast to Downtown St. Paul (of which it is surely a part). Because the Trail is actually a converted Soo Line Railroad grade, the path is handicapped accessible. From one end to the other, walkers will find ample opportunities to swim, to fish, or—after indulging in all the above mobility—simply to rest.