Rent A Landmark in Queer History

As Pride Season swings into motion, Ordway Center for the Performing Arts offers a marvelous way to celebrate and remember just how far we have come: the musical Rent. It holds a unique place on three levels—as a landmark in theater history, in GLBT history, and in society’s understanding of HIV/AIDS. The 1996 rock sensation, which won both the Tony Award and the Pulitzer Prize, still is running on Broadway. Its national tour returns to the Ordway on June 17. 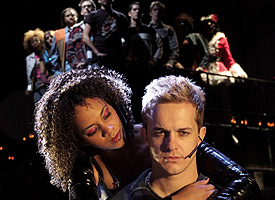 One moment perhaps crystallizes why the show was such a groundbreaker. In the middle of a lover’s spat, Mimi, a heroin addict, and Roger, a rock musician, grab their AZT medication when their beepers go off. The audience then knows they are both HIV-positive, as they break into song.

Of course, it’s not a song in the vein of Rodgers and Hammerstein, but rather, in the gritty contemporary rock sensibility of composer-lyricist-librettist Jonathan Larson. Rent reflects Larson’s own intimate multiracial and multisexual orientation world of New York’s Bohemia in the twilight of the Reagan-Bush era.

The East Village characters range from bisexual to macho homosexual to transgender gay to lesbian to straight. The only other Broadway show to come anywhere close to representing such a cross-section was Lorraine Hansberry’s 1964 classic The Sign in Sidney Brustein’s Window, which, of course, predates the AIDS epidemic.

In the early 1990s, Larson began to work on Rent  while waiting tables at the Moondance Diner. In 1993, it was read at the New York Theatre Workshop, but was extremely long. That said, the material was extraordinary, not just because of its characters’ sexual identities, but also because of their dire circumstances, blunt personalities, and raw lifestyle marked by poverty, marginalization, and desperation.

Larson based his musical on Giacomo Puccinn’s opera La Bohème, which had premiered in 1896, a hundred years before Rent’s debut. Puccini’s opera has tuberculosis as its plague in 19th-Century Paris.

Larson’s musical reflects his struggle as an artist at the time, as well of the other various artists he lived among, worked with, and bonded with at the time. His life, like his play, was, and is, a vision of very diverse people living on the edge, coming together and attempting to create a new culture from those outcast by social norms.

Rent, unlike standard Broadway fare, is void of sentimentality. Paradoxically, that’s exactly why the piece is such a wrenching and powerfully moving experience. It defies the tired conventional wisdom that American audiences are shallow, and uncomfortable with deep, dark subject matter. It doesn’t talk down to them. The humor is ironic and sardonic.

The characters are either doomed, or live in the shadow of doom—not only because of the incurability and unmanageability of AIDS at the time, but also because of the economic duress of waning Reaganomics. It also pushed way forward the acceptance, love, and humanization of transgender characters, like the totally adorable and lovable Angel.

Seldom has such bleak subject matter been so enthusiastically embraced as an American cultural phenomenon. Of course, it’s also an enormously sexy show, which in itself is subversive, given the “desexualizing” image that AIDS had come to have. Once you were diagnosed, you were a pariah, and it was unthinkable that you would have sex again, even if it was extremely low-risk. Rent revealed to the masses that despite the death-dealing of AIDS, the life force of sexuality still burned within those afflicted.

Ordway’s Vice President of Programming, James Rocco recalls, “Rent turned the world on its ear. Spoken in the language of youth, it addressed issues of gender identity and the devastation of AIDS, while urging us to celebrate life. It’s dual message of ‘no day like today’ and ‘measure your life in love’ is an anthem for the new America, an America where everyone has the freedom to be who they are, and live their days on earth to the absolute fullest.”

In Rocco’s words, “For those of us who knew Auntie Mame, we were overjoyed to see her philosophy going to new heights.”

Like Auntie Mame, Rent reaches across the divide to all people with a heart. It’s about love and enlightenment under siege. Sure, it’s queer as a three-dollar bill, but its tales of love in a society and socioeconomic order that undermine love is a dilemma timeless and universal. Straight and queer audiences have resonated widely and deeply with Rent. I predict they’ll do the same a hundred years from now, climate change willing.