Second-year medical students at the University of Minnesota-Twin Cities are conducting a survey as part of their Physician and Society coursework, under the advisement of Dr. Eli Coleman of the Family Practice and Community Health Department. It is for GLBT adults who live in the Twin Cities. Those involved would greatly appreciate as many people as possible participating in the survey.

The purpose of the study is to find out if the rates of cancer screening in the Twin Cities GLBT community is different than in the general population, as well as whether a person’s relationship with doctors is influenced by his or her sexual orientation.

Personal questions about sexual orientation and health will be asked during the survey that will take approximately 10 to 15 minutes. All information gathered will be kept strictly confidential.

Lavender held a contest for a pair of Margaret Cho tickets for her April 25 local show. With thousands of entrants, one lucky man walked away with the coveted prize. 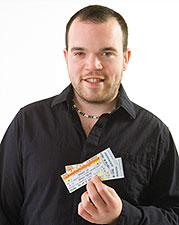 Brad Gregory of Minneapolis has his boyfriend of a year, David Swenson, to thank. According to Gregory, “He is the one that actually entered me into the contest.” Gregory intends to take Swenson with him to the show. A native of Iowa, Gregory has lived in Minneapolis for the past seven years, where he is a manager for Fossil Jeans store at the Mall of America.

Margaret Cho, who long has been the gay man’s comedian, recently began her Beautiful tour in Sydney, Australia, which will continue through the beginning of June. She makes her Minneapolis appearance April 25, then, her only other Midwest stop is Chicago on April 26. Special guests with Cho are Liam Sullivan and “Shoes” singer Kelly.

For those not lucky enough to win tickets, they are still available through TicketMaster for $26 to $43.