The Minnesota Lynx drafted basketball player Emily Fox in the 30th overall selection. She played guard for the University of Minnesota. She enters the WNBA after a storybook career with the U of M. Only five-foot-nine, she finished her career ranked seventh in scoring (with 1,449 points), third in assists (413), and fourth in steals (242). A native of Highland Ranch, Colorado, Fox is a three-time All-Big Ten honoree. She leaves the U of M as the 18th player in its history to score more than 1,000 career points; the seventh player to record more than 100 three-pointers; and the third-best free-throw player, shooting with 78.1 percent. 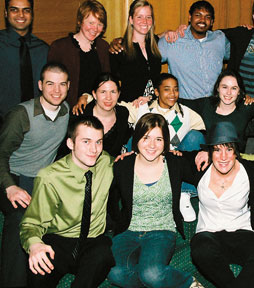 On April 7, PFund awarded scholarships to 19 students at the second annual Moxie Awards ceremony, held at the University of Minnesota Humphrey Institute of Public Affairs. Nine students were enrolled in college, while the rest were high school seniors preparing to attend college. To receive a scholarship, students must be GLBTA, and show a commitment to serving and leading the GLBT community. PFund is the only Minnesota foundation dedicated exclusively to GLBT equality. PFund also made grants to 16 nonprofit agencies at the awards. So far in 2009, the organization has awarded more than $138,000 in scholarships and grants—the largest annual amount in its 21-year history.
Park House Hosts Open House at New Location

A month after officially moving to its new home at the Phillips Eye Institute Medical Office Building, 710 East 24th Street, Suite 303, Minneapolis, Park House hosted an open house for the public on April 2. Though not fully unpacked, the organization was excited and eager to show off its new space, inviting anyone who wished to join in an afternoon of celebration and renewal. The new location is more up-to-date, allowing the Park House the opportunity to do more in the fight against HIV/AIDS. It’s a place where people living with HIV/AIDS can find support and socialization, while increasing physical health and emotional wellness.