Jason and deMarco Concert at All God’s Children MCC 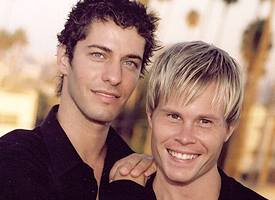 Spiritually gifted singers Jason Warner and deMarco DeCiccio are gracing the Twin Cities on January 20, 7 PM, at All God’s Children Metropolitan Community Church, 3100 Park Avenue, Minneapolis, with a event showcasing their talent. Enjoy this free concert, which promotes their international release of Till the End of Time. Their hit singles include “Trying to Get to You” and “This is Love.” The duo won Music Video of the Year in 2006 on MTV’s LOGO, and have been featured in Abercrombie & Fitch stores playlists. They can be found in the full-length documentary We’re All Angels that has been featured at the 19th annual New York LGBT Film Festival, OUTFEST 2007, and the 25th Los Angeles Gay and Lesbian Film Festival. For more information on this amazing pair, visit www.agcmcc.org.