On November 5, Renee Brown, WNBA Vice President of Player Personnel, presented Candice Wiggins with a Woman of the Year trophy at Target Center during the Timberwolves versus Spurs game. 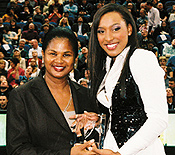 To be eligible for the award, a player must come off the bench in more games than she starts. Wiggins came off the bench in 29 of the 30 games in which she played, helping the Lynx win 16 games, the second-best total in team history and a six-game improvement over last year. She scored 20 points or more seven times, beating out Chamique Holdsclaw’s single-season WNBA mark.

Thanks in part to Wiggins’s efforts, the Lynx set a WNBA record by receiving an average of 33.9 ppg (points per game) from their reserves, which also beat out the 33.4 ppg set by Sacramento in 2006. she tallied an average of 15.8 ppg in her 29 bench appearances, also breaking Holdsclaw’s 15.0 ppg record in 2006.

On October 21, the University of Minnesota held its third annual Transgender Commission Open House at the St. Paul Student Center North Star Ballroom. It was sponsored by the Queer Student Cultural Center.

This year’s event focused on gender freedom. Special guest speaker was Kate Bornstein, an internationally renowned educator, author, performance artist, social justice activist, and gender outlaw. Those in attendance learned how to get involved, and network with people interested in creating change.