On September 27, Open Arms of Minnesota, a nonprofit that serves meals to people with HIV/AIDS, officially broke ground for its new building at 25th Street and Bloomington Avenue in Minneapolis. It will outgrow its present quarters, which receives about five new client requests a week, by the end of this year. By doubling its capacity, which will allow for more clients and volunteers, Open Arms hopes to increase its reach in the community. 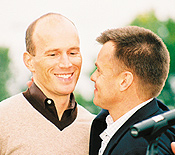 Open Arms launched a capital campaign in May 2007 to raise about $8 million. So far, it has received $5.6 million from private contributions.

In 1986, Open Arms was founded when Bill Rowe began serving meals out of his apartment to HIV/AIDS patients. In 1996, services were expanded to include other chronic illnesses such as breast cancer, multiple sclerosis, and Lou Gehrig’s disease. Today, the organization serves 500 clients a week, and expects to deliver 250,000 meals this year.

For more on Open Arms or to donate money, visit www.openarmsmn.org. 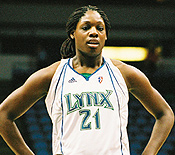 The NCAA announced October 19 that Minnesota Lynx forward and former University of Tennessee standout Nicky Anosike has been named 2008 NCAA Woman of the Year. She is only the second basketball player to win the award since its inception in 1991.

The award—one of NCAA’s most prestigious—was presented at the 19th annual NCAA Woman of the Year Award Dinner at the Murat Centre Egyptian Room in Indianapolis, Indiana. Her mother, Ngozi Anosike, and her head coach at Tennessee, Pat Summitt, accepted the award on Anosike’s behalf.

Anosike said, “I am truly honored and blessed to be selected from a great group of collegiate women athletes for this prestigious award. I thoroughly enjoyed my four years as a Lady Vol, and left Tennessee not only a more complete basketball player, but a better individual as well. To be recognized for my service and commitment to my academics, community, and basketball is very special to me. This award means a lot, and I cannot thank the NCAA, my former and current teammates, and my family enough for their support.”

The NCAA Woman of the Year Award honors senior student-athletes who have distinguished themselves throughout their collegiate careers in the areas of academic achievement, athletic excellence, service, and leadership. 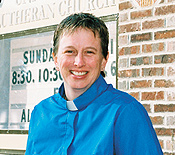 Minneapolitan Jodi Barry was ordained to the ministry of the Lutheran Church on October 25 at Grace University Lutheran Church in Minneapolis, where she has been a youth minister intern for the past year. The ordination was conducted by Extraordinary Lutheran Ministries, a national network committed to full acceptance of gay and lesbian pastors in the Lutheran Church.

The ceremony marked one of the first ordinations by the Evangelical Lutheran Church of America (ELCA) since it adopted a “refrain and restraint” policy in 2007. It instructs church leaders not to respond harshly when individual congregations or groups choose a gay or lesbian minister. Such ordinations are not recognized officially by the national church body.

Barry was quoted as saying, “Our goal has always been not to start a new church, not to leave the ELCA. A lot of people are working for full inclusion. Of course, I want that. It’s frustrating, it’s painful.”