Lynx Send Augustus to the Olympics 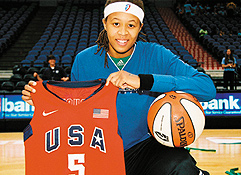 In May, Augustus was chosen one of the first nine members of the dozen players who will make up the 2008 US Women’s Olympic Basketball Team heading to Beijing with gold on their mind. She joins previous Olympic gold medalists Lisa Leslie, Katie Smith, and Sue Bird.

Augustus has been quoted as saying, “It is a privilege and an honor to be able to represent the United States at the 2008 Summer Olympics in Beijing, China.”

The US Women’s Olympic Basketball will be held August 9-23, with the US team playing for the first time August 9, then every other day through August 17. Times and opponents are yet to be determined for many games.
Rainbow Families Children’s Chorus Joins Minnesota Freedom Band for Pride Concert

Minnesota Freedom Band is a Twin Cities-based, nonprofit community organization made up of GLBTA volunteers committed to presenting quality performances, and providing opportunities for members to improve musicianship and relationships with the community.

Rufus Wainwright and Melissa Etheridge both have scheduled stops in Minneapolis during their upcoming tours.

Etheridge appears August 9 at O’Shaughnessy Auditorium at the College of St. Catherine in St. Paul as part of The Revival Tour 2008. Her latest CD, The Awakening—led by the single “Message to Myself”—which was released September 25, peaked at 13 on the Billboard 200, and spent six weeks on the charts. It was her first album in three years. She has shared that the songs are 100-percent truthful, and about her and her feelings.

Wainwright performs October 16 at the State Theatre in Minneapolis. For his latest CD, a re-creation of Judy Garland’s 1961 concert, he incorporated a 36-piece orchestra. Released December 4, it failed to make an impact on the charts. His preview LP with new music, Release the Stars, released in May 2007, reached 23 on the charts.

Tickets for both shows can be purchased at <www.ticketmaster.com>.