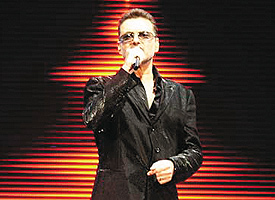 The man who is as famous for his public restroom scandal as for his musical hits is coming to the Twin Cities. George Michael’s first North American tour in 17 years will be stopping at the Xcel Center in St. Paul on July 7. The 25 LIVE tour, which just got under way, spans 80 shows in support of his newest release, Twenty-Five. The album—a mix of some of his biggest hits, including his time with WHAM—also has a few new songs.

Michael first made it big with British band WHAM! before going solo with the 20-million-selling album Faith. He was outed famously after trying to pick up an undercover police officer. He later made a music video in which he dressed as a police officer for the song “Outside,” portraying outdoor sex, both hetro and homo, as a natural thing.

Tickets, now on sale through TicketMaster, are $52 to $177. Be sure to get tickets before you go-go.

Family Equality Council Executive DirectorJennifer Chrisler stated, “We are very excited to have Rainbow Families join Family Equality Council. We see a bright future ahead for our families, and hope to export the local-level best practices that Rainbow Families has developed over the last 13 years to benefit GLBT parents in other parts of the country, while maintaining diverse and robust programming in Minnesota. This is a wonderful step forward in building a world that recognizes, respects, protects, and celebrates all loving families.”

Rainbow Families, which has been a regional leader, is well-recognized for its efforts in building a safer place for GLBT parents and their children. It is best-known for holding the largest conference for GLBT families in the nation.