Polo, the Sport of Queens

Polo has been called “the sport of kings.” It’s now the sport of queens as well. In Southern California, the Gay Polo League (GPL) is thriving. It doesn’t matter if you can’t tell a mallet’s head from its shaft, or even if you never have mounted a horse. All comers are welcome. 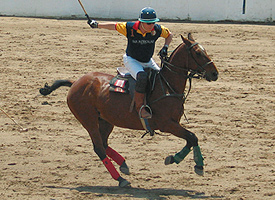 At first glance, polo seems poles apart from gay life. One of the oldest horse sports in the world, it originated in China. Polo moved to India, where the British discovered it.

Today, polo is played primarily by two types of people: professionals and their “patrons” (pronounced “patrones”), wealthy benefactors who sponsor pros in return for playing alongside them. In places like Argentina, where polo is particularly popular, it is considered a very macho sport.

Polo is expensive. Games consist of six “chukkers” (periods), each seven-and-a-half minutes long. Ponies are run full tilt throughout each chukker, requiring a new mount for each period. It costs $50,000 a year to care for, groom, and play six ponies. Multiply that by four players, add the care and maintenance of a grass field, and you’re talking at least $200,000 per team.

But gay men find a way to get their hands on everything. Two years ago, Chip McKenney, 50, a lawyer working as chief operating officer of a broadcast design studio, wanted a way to meet other gay men outside of bars and gyms. He never had played polo, but had been around horses ever since his childhood in Maine.

“I realized polo could be a great activity for gay guys,” McKenney, says. “There’s the camaraderie and social element of a team sport. Polo is played all over the world, so it involves travel. And it appeals to all ages and skill levels.”

McKenney—who never had been on an organized sports team—contacted John Westley, resident coach at the Santa Barbara Polo and Racquet Club, who was enthusiastic.

Soon, largely through word of mouth, nearly 40 players were learning the game, and loving it. The youngest is 26; the oldest, 54. Most never had ridden a horse before, though marketing guru and author (Never Eat Alone) Keith Ferruzzi played polo at Yale University. All are successful professionals. Many are in entertainment—hey, this is LA—while others are bankers and business executives.

The common denominator is that they are “adventurous people interested in experiencing new and different things,” McKenney relates.

Despite polo’s elitist, manly image, coaches and members of three organizations—Santa Barbara; the California Polo Club, Los Angeles; and Indio’s El Dorado Polo Club, east of Palm Springs—have been extremely helpful. The California Polo Club has helped promote Wednesday “Gay Polo Nights.” Santa Barbara allows the gay players into its clubhouse, even though they are not members. All three groups help GPL arrange games, and they welcome partners of players.

“If you’re an athlete, opponents respect you,” McKenney states, citing an example: “The California Polo Club has a Christian team. They think ‘the Christians versus the gays’ is hysterical.”

However, McKenney observes, “We haven’t competed at the highest level yet. That may be a problem. If it is, we’ll just have to outride and outplay whoever it is.”

So, how gay is gay polo?

Turning serious, McKenney muses, “As gay people, our lives are different, so we bring a different sensibility to everything we do. Some of our players are in polo for the social aspect, some for competition, but both groups mix easily. That’s different from straight polo, which is more about skill level and what you bring to the team.”

GPL has only one lesbian. “We want more,” McKenney insists. At postevent tailgates, the absence of women and children is noticeable.

Looking ahead, McKenney plans to recruit new players through booths at Pride festivals and gay rodeos. San Diego is fertile territory for expansion.

“I have a national vision for this,” McKenney explains. “It’s such an appropriate sport for gays. Polo has a majesty, a beauty, a uniqueness that other sports may not share.”

Eventually, McKenney hopes polo becomes a Gay Games sport. In the meantime, GPL plans a trip to Argentina, to watch the big leagues in action.

“You don’t have to have skills. Polo is learnable by anyone,” McKenney concludes. “And you don’t need your own horse. That would disqualify everyone on our club.”