Political Health – Vote for a Checkup

Politics and health always seem to be tricky things to figure out and follow. How does one choose the right health-care plan? What does DFL mean? Red; blue; Green Party? Deductibles and copays. It’s no wonder most people just avoid them to the best of their abilities. 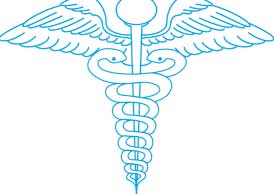 But fret no longer. Fear color crayons and state maps no more.

Politically speaking, Minnesota hasn’t always been Democratic or Republican. Third parties held great sway. The Farmer-Labor Party actually was the most successful third-party in our state history, and around 1950 or so, it migrated into what we now know as the DFL, or Democratic-Farmer-Labor Party. Since that time, Minnesota has stuck with it, and other than a bump in the road—Richard Nixon—has almost always voted Democrat, labeling us as a blue state.

Speaking of colors and the 1950s, it seems that decade was a time for political changes. With the advent and popularity of color television, it was nice to show maps with colors on them to help the average voter understand where the elections were going.

Using the flag as a source, journalists used red, white, and blue to show Republican, undecided, and Democrats. Up until the 2000 election, these color-schemed maps and their usage were never consistent or popular. In one place red meant Republican, and another it meant Democrat. With the 2000 election and the long, drawn-out nature of it, the media adopted a universal color scheme, and it became very well -known.

And Green means you still don’t have a chance on becoming President…yet.

For the DLFers among us their Website is <www.dfl.org>, where they have already begun campaigning for the 2008 election and a chance to take control of the government. They have begun the campaign with One-Year-Out House Parties. The idea was to celebrate that it will be only another year “until we change the direction of our state and our country.” Perhaps that will include the much touted healthcare overhaul. On the national level, visit <www.democrats.org>, where you can learn how the Republicans are screwing everything up, what’s going on in the government, and learn more about the Democrat presidential nominees.

As for the other side, the Republicans in Minnesota can be found at <www.gop-mn.org>. Here, you get to read about how Democrats can’t control spending, what’s going on at the local level, and learn more about the 2008 Republican National Convention being held in the Twin-Cities. Nationally, just go to <www.gop.org>, and learn how democrats can’t be trusted on the national level and the latest on what’s going on with the Republican Party. Sadly, both sites are missing easy to find links to the Republican presidential nominees, but surely they will be featured as the debate heats up towards November.

If blue and red aren’t your cup of tea, <www.vote-smart.org> shows links to virtually every party you could want—even Party X or Party Y.

Where would politics in 2008 be without health care? Being one of the most contested issues of the early election, it’s only going to get more intense.

For most, this is a nightmare that doesn’t ever seem to get easier. In fact, it seems only to get harder each year: trying to figure out what changed, why it changed, and how it’s going to affect you.

More than 42 million Americans don’t have health care. Reasons range from not feeling the need to have it, to not being able to afford the increasing costs. And those numbers are only increasing every year, which is why health care is a major issue for the 2008 presidential election. So, how much does health care really cost (for those that don’t have it or never paid attention)? In 2005, it averaged $4,200 per person, or as much as $11,500 for a family of four. Or to make it sound more shocking, $350 to $1000 a month! Figures that both major political parties are spouting that they can lower it. Depending on your working situation, though, you can have zero to all of it paid (let’s hope you are among the latter). But even after paying all that money, you still pay more. There are co-pays and deductibles, which are actually two very different things.

The copay is an amount that you are automatically billed, every time you visit a doctor or clinic. Copays are as wide-ranging as the drugs. Some companies will have a set co-pay, meaning it’s the same no matter what you do. Others will charge differently for different services or prescriptions. Try understanding that one.

So, now you’re paying to have insurance, and paying to use your insurance. Could it really get worse? We can’t forget the deductibles.

Again, depending on your health insurance, your deductible can be nothing or a couple thousand. The deductible, like your car insurance (assuming you can afford all these insurances), must be met before your insurance starts paying for the services. Most health insurances will pay part of a medical expense and force you to pay the rest. Once the deductible is met (if it is met), the insurance company will pay for all your medical services covered for that period. Services and prescriptions may have separate deductibles as well.

So, to help ease some of the issues, here are some quick and easy guidelines:

First, check to see if you qualify for help or have insurance through your work. <www.dhs.state.mn.us> is a good Website to help with this.

Along that same line, paying lower premiums, but having higher deductibles, can be just as bad. If you can’t afford the deductible, and avoid getting help, your health care isn’t actually helping you.

Last, and of course, most important, that pain you feel now is going to cost you more now than it would have if you had gone in for a checkup and found the problem before it was hurting you—preventative care is always cheaper than the alternative.

So, get involved with politics, and see what your party can do to help you with your health care!