Picosa Putting Spice in Your Life

“‘Fusion’ started happening the minute man started cooking—when the first piece of raw meat was pushed too close to the fire.” 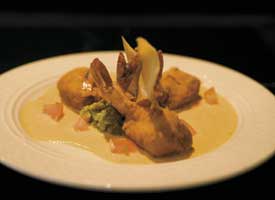 First, Mendoza is quick to explain, although “Picosa” literally means “Spicy One,” it does not mean that all the food is highly spiced. Like “fusion,” “picosa” covers a variety of meanings. In Spanish slang, “picosa” has a “Wow!” overtone, equally applicable to a flashy red Ferrari, a hot new band, or the fiery little redhead dancing Picosa’s logo. Picosa conveys a mood, an ambience, a piquancy and flavor that includes, of course, but is not limited to, the dishes set before you.

Mendoza explains that he chose the phrase “Nuevo Latino” because he didn’t want to denote only “Mexican,” which is but one of the Latin countries represented in the recipes. Many folks in the States, he has found, see any real estate below Texas—on down to Tierra del Fuego—as “Mexico,” while Picosa offers a broader view of Latin peoples, customs, and cuisines.

“You won’t find enchiladas on my menu,” Mendoza laughs. What one does find, he explains, “is what a Latino here in the United States would do with the food on hand.” His grandmother, he recalls, “had to be creative.” The baskets of soft and crispy fry bread, for example, are based on her Sonoman Indian method of preparation.

Picsoa, Mendoza says, is inviting a clientele that will be open to exploration and innovation—one that will appreciate the subtle evolutions of a given dish or flavor. 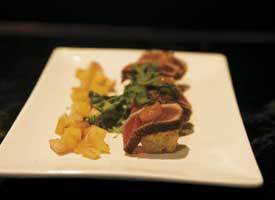 And what about that food? We were able to sample several dishes that will dispel any preconceptions you may have had about “Latin cuisine.” The menu listing—“Shrimp stuffed with crab and queso blanco [white cheese] in crisp corn flour crust served with ancho cream and guacamole”($9.50)—doesn’t do justice to the tenderness of the succulent shrimp; the mingling of the crab essence and flavor; and the quality of the toothsomest, lightest batter it will be your pleasure to encounter.

A second appetizer—“Crisp fried calamari served with roasted garlic and jalapeño dip” ($9.50)—has a pleasant surprise in store for you in the dips: one rich orangy-red with tangy red jalapeño and garlic; the other a complementary, slightly sweeter dark-green mango and jalapeño mix.

Next: “Plantain crusted sea bass filet in caramelized garlic and orange sauce served with quinoa [South American grain-like seeds].” Tender fish, its own flavor mixing with sweet/spicy/citrus melted onto the tongue, while our eyes admired the beautiful cloisonné effect of the caramelized glaze ($24).

Tomatillo braised pork on sweet potato corn flour cakes is as tasty as it sounds. The tender chunks of pork shoulder please the palate, but the real delight is the sweet potato cakes. No mere supporter of the pièce de résistance, these intrigue and satisfy in their own right—a mellow sweetness with a texture light-years away from either mushiness or toughness. I’d order a plate of the cakes alone. 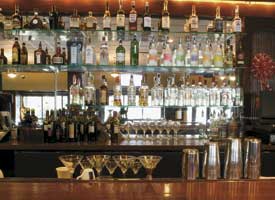 I’ll describe only two of the house cocktails: margaritas of Brobdingnagian proportions (my first encounter with a 14-oz margarita glass); and the newly minted Noche en Fuego (Night and Fire), a plum-colored confection of muddled limes and sugar, jalapeño, tequila, OJ, soda water, and a splash of red wine.

Beyond sitting and eating (and who wants to go beyond?), something’s happening every day at Picosa—from daily breakfast or brunch buffets ($6.95-$8.95) to all-day drink specials that include $3 Bloody Marys and Screwdrivers. I can’t reveal all the details—call or visit online. (I must mention Saturday: Brunch Buffet 10 AM—2 PM; and a lively seven-piece Salsabrosa Band 9 PM-1 AM, with a free salsa dance lesson on the spacious dance floor at 9 PM, compliments of Social Dance Studios.

On our visit, Picosa was decked out for the Holidays, which will culminate in a fabulous dining-cum-party experience on New Year’s Eve. Dinner is by reservation only, to be followed by a New Year’s Ball Havana Style on into 2008. Watch the Times Square Ball fall into 2008 on Picosa’s 10’ mega screen! 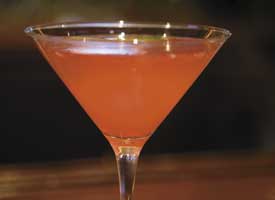 And if you have a chance when you visit, chat with the chef. Mendoza’s own history is a story in itself: starting to cook professionally as an apprentice chef at 13; moving later to the Four Seasons; cooking (at different times) for Muhammad Ali and Bill Clinton. He has poured his 30 years of passionate innovation into this warm and spacious venue whose motto is: “Good times by the river!”